"The beauty of the eye lies in its expression, whether it has borrowed its color from the corn flower, or shines like the black diamond, or reflects the blue of a May sky, or is veiled under long dark eyelashes." - Baronne Staffe, "My Lady's Dressing Room" (1892).

Victorian ladies typically kept their beauty regimes top secret, making everyone believe that everything, from their tiny waists to their pink cheeks to their long fluttery eyelashes were un-manipulated eternal truths. Long eyelashes were certainly a part of those regimes.  Women have wanted long eyelashes since Ancient Rome. Pliny the Elder claimed that excessive love-making caused eyelashes to fall out, making long eyelashes a symbol of chastity. The question here is: how did the 1890s woman lengthen her lashes?

In his book The National Encyclopaedia of Business and Social Forms (1879), James D. McCabe recommends trimming eyelashes to make them grow longer, suggesting that the sooner in life one begins the process, the more effective it will be. The process is in keeping with the Victorian ideal of encouraging natural beauty, rather than resorting to quicker artificial fixes. Baronne Staff's My Lady's Dressing Room (1892) additionally recommended applying Pomade Trikogene to grow longer eyelashes.

Pomade Trikogene was believed to improve hair growth wherever it was applied. I found a recipe for it in A Practical Guide for the Perfumer (1868). 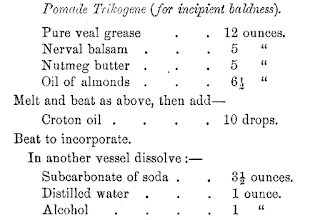 I don't know what "nerval balsam" is, but I wouldn't put pure veal grease anywhere near my skin! Croton oil is worse. It causes diarrhea, if ingested. When applied to the skin, it causes irritation and swelling. Because it is so awful, researchers use it on lab animals to study how pain works. It has been found to promote the growth of tumors, but does nothing for eyelashes. If rubbing it around the edges of your eyelids sounds bad, some hairdressers thought up an even more painful alternative in France.


"The Parisans have found how to make false eyelashes. I do not speak of the vulgar and well-known trick of darkening the rim around the eye with all kinds of dirty compositions, or the more artistic plan of doing so to the inside of the lid. No, they actually draw a fine needle, threaded with dark hair, through the skin of the eyelid, forming long loops, and after the process is over -- I am told it is a painless one -- a splendid dark fringe veils the coquette's eyes." Henry Labouchère (1882). Source.

If I was thinking of getting eyelash extensions when I started writing this, I'm no longer considering it! Labouchère was only the first to tell anglophones about this terrifying method. In July 1899 the Dundee Courier announced that“Irresistible Eyes May Be Had by Transplanting the Hair.”

While I've never liked the idea of gluing hair to my eyelids, it seems like the safest method for creating longer lashes. There are many claims to inventing stick-on lashes, including the 1911 patent below that was filed by a Canadian, Anna Taylor. 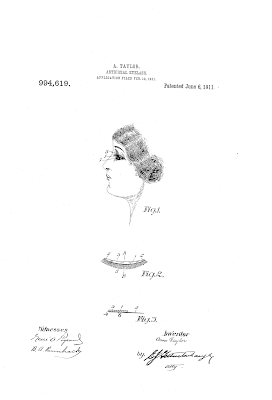 Her patent was for:

Taylor wished "to improve the personal appearance of the wearer, without adding discomfort, and. generally to provide in such articles the natural efi'ect at a minimum cost," but while so many women endured torture to lengthen their lashes, Taylor was by no means the first to invent such a convenience.

False eyelashes (at least similar to Taylor's) were so ubiquitous in the late 1870s that the Royal Cornwall Gazette complained about them in 1879:


"False eyelashes are not the perfect inventions they are represented to be. I saw one floating in a cup of tea the other evening, and the lady went on toying with the saucer and conversing, and never for a moment suspected that the left side of her face, by contrast with the right looked rather as if it were slowly recovering from a small explosion of gunpowder." Source.

Before investors, I mean... inventors, like Taylor, began packaging and patenting false eyelashes around the turn of the century, false eyelashes were like any other hair piece. The woman mentioned in the Royal Cornwall Gazette would have got hers from her hairdresser, who likely visited her at her house, the way that dressmakers did. 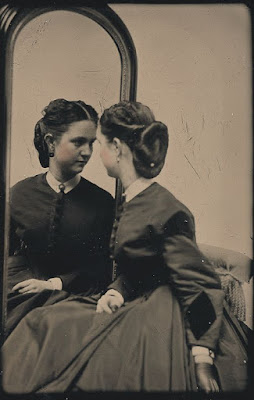 Because these transactions were so private, there is little we can use to know how popular false eyelashes were before they became a highly marketed consumer product in the 20th century. Still, it is safe to assume that they are more popular now than they were then.