Seriously, how could they?

This might be an unpopular post. One reason that myths persist long after they've been disproven is that people want to believe them. Pictures of Victorian dead people are so popular today that people try to forge them. Contemporary imposters are easily spotted and often meant to be art, rather than forgeries, but many fans of Victorian mourning portraits stubbornly refuse to believe they could be wrong about the health of the people in old Victorian photos.

Why does it matter if we enjoy mistaking a person in an old photo for a corpse? Imagine if people in 2116 published your Facebook profile picture as an example of fascinating post-mortem photography. When BBC News published Bethan Bell's article yesterday, full of pictures that she claimed were of people who died, one commenter noted that one of the pictures was of her great-grandmother.

As it turns out, the commenter's great-grandmother was in fact dead in the photo Bell shared, but this was not the case in some of Bell's other photos. 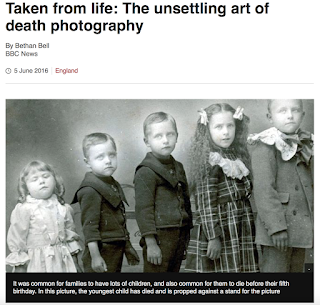 Bell claims "the youngest child [in the above photo] has died and is propped against a stand for the picture." The type of stand Bell is referring to can be seen clearly in the picture below.

Sadly, Bell has been duped by the persistent myth that these stands were used to prop up corpses for mourning photos. As is evident in this photo, the child being photographed is alive and such a stand is not strong enough to keep a dead person upright. Take a closer look at the stand. 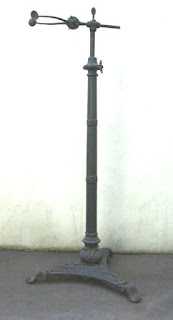 I'm not convinced I could hang my purse on a stand like that without knocking it over, so you may safely assume that, any time you see evidence of one of these stands in a photo, the person is alive.

Bell shares two other photos of people who were alive when the portrait was taken. She asserts that sometimes open eyes were painted onto the photograph. If you've ever tried painting something on a photograph, you will know that this rarely works out well. Because it generally looked terrible, Victorians rarely did so and the woman on the left is sick, but not dead when visited by the photographer (those are her real eyes). 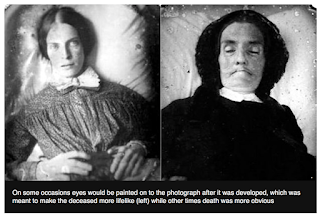 Finally, not all Victorian mourning photos contained pictures of the corpse. It was also common to take a living photo of the deceased and have it reprinted with a phrase, like "Gone to Jesus," in honour of their passing.

A group of contemporary Victorianists have even banned together to create a web site to dispel the kinds of myths about Victorian death photography that Bell and BBC News are currently spreading.