Like any other kind of writer, historians want to make their writing interesting. So, what is so-and-so had sex with so-and-so? That would be interesting!

Clearly, historians can be perverts too. This is one of my favourite examples of sexualized history in the blogosphere.


Because mine is an evil and a petty mind, suitable more to wallowing in the sordid sexual goings-on of literary giants than in reading their work, I take every opportunity I can to inform people who may not have known that Walt Whitman and Oscar Wilde almost certainly had sex in 1882.

We don’t have evidence that Wilde and Whitman had sex. It would be weird if we did. They had the opportunity to have sex and Wilde liked to imply that Whitman kissed him, but a kiss is just a kiss and Wilde preferred younger, less hairy men. 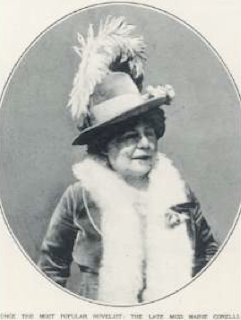 I bring this up to talk about Marie Corelli and her companion, Miss Bertha Vyer. Some biographers and historians like to think they were lesbians. Why?

There are lots of reasons. An early biographer (1903) wrote:


Miss Corelli’s sole companion after her convent school-life, with the exception of Dr. Charles Mackay [her father], was her devoted friend, Miss Bertha Vyver, daughter of the Countess Vyver, a not unimportant personage at the court of Napoleon III. The friendship between Miss Vyver and Miss Corelli has always been of the closest description.


Since Dr. Charles Mackay welcomed Miss Vyver as his “second daughter,” they have never been separated. In all her daily life, not the least the nursing of Dr. Mackay through his long illness, Miss Vyver has been by her side helping her in home difficulties and trials as help can obly be given by one with whom there is perfect sympathy. Miss Vyver has seen every detail of all the work the novelist has done, and to-day the friendship between the two is closer and dearer than ever for the years that have passed, and the sorrows and joys that have been borne in company.

Ok. The author doesn’t come out and say they had sex, but this kind of narrative led to the belief that Corelli was a lesbian, though she never self-identified as one and fell in love with a man three years later. That romance didn’t last. He was married and didn’t return her feelings, but, with the support of her good friend, Corelli gradually moved on. 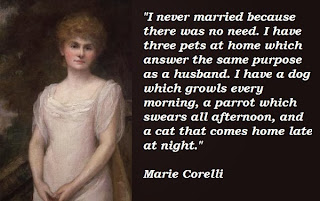 Two people can be good friends and never have sex. Look at Watson and Sherlock Homes! Wink-wink, nudge, nudge!