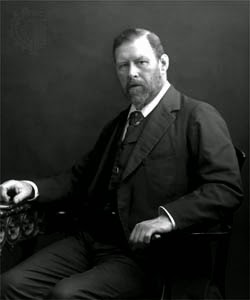 Who was Dracula? Ever since the novel was published in 1897, scholars and fans have been trying to answer this question. In honour of Bram Stoker's birthday, I'm sharing a few of the ideas I've heard over the years.

Vlad the Impaler was the Prince of Wallachia a member of the House of Drăculești, and descended from a member of the Order of the Dragon. The Order of the Dragon was founded to protect Christianity in Eastern Europe. After his death, Vlad became a folk hero in Romania and parts of Eastern Europe for protecting the Romanian population. The nickname "Impaler" is part of the folk legend, that he impaled his enemies on the battle field. During his lifetime, he gained an excessive reputation for cruelty.


In Dracula: Sense and Nonsense (2005), Elizabeth Miller argues that Vlad the Impaler was not the inspiration for the famous vampire. Because we didn't have access to Stoker's notes until fairly recently, many myths about the novel were created through speculation, and this was one of them.

It's still very appealing to the imagination, and permeates films about vampires, including Bram Stoker's Dracula (1992).

Irving was one of the most famous actors in the world in Stoker's day, and he was Stoker's boss, the owner of the Lyceum Theatre, where Stoker worked between 1878 and 1898. Stoker adored Irving, modeled many of his own opinions after Irvings, claiming in Irving's biography to have been able to speak with the same mind as Irving.

Strong arguments have been advanced that Irving was Stoker's real-life inspiration for Dracula's character, the way that he moved, and commanded all of those around him. Stoker even wanted Irving to play Dracula on the stage. Irving refused.

If you read my blog, you know who Oscar Wilde was. He and Stoker were long time friends, going back to Dublin, where Stoker stole Wilde's childhood sweetheart, Florence Balcombe.

Theories that advance Wilde as an inspiration for the vampire, usually draw on Wilde's lifestyle, especially his homosexuality, turning vampirism into a metaphor for homosexuality. Stoker was extremely sympathetic toward his friend during his infamous trials of 1895, and may have been homosexual himself, as has been evidenced in his letters to Walt Whitman.

Who do you think inspired the world's most famous vampire?

If you have enjoyed the work that I do, please consider supporting my Victorian Dictionary Project!
Posted by Tine Hreno at 10:00 PM