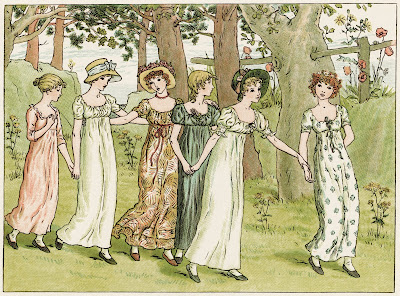 Kate Greenaway was the author and artist of Victorian childhood by the 1890s. She drew the idyllic images of Victorian children that we think of today and she drew many of the images children were looking at. Biographers compare her work and her life to that of Beatrix Potter. During the 1890s, the aesthetic she created was called Greenaway vogue. 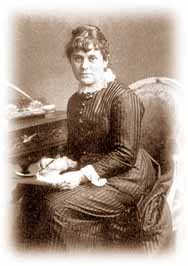 Born in 1846, London has since absorbed Hoxton, the romantic community Greenaway grew up in. Her father was a draughtsman and an engraver and her mother ran a dress shop.


"I had such a very happy time when I was a child, " Greenaway is reported as saying in M. H. Spielmann and G. S. Lanyard's 1905 biography Kate Greenaway, "and, curiously, was so very much happier then than my brother and sister, with exactly the same surroundings. I suppose my imaginary life made me one long continuous joy-filled everything with a strange wonder and beauty. Living in that childish wonder is a most beautiful feeling-I can so well remember it. There was always something more-behind and beyond everything-to me. The golden spectacles were very very big." Source.

Greenaway's parents both encouraged her to draw. As a child, her drawings were often inspired by current events, like the Great Indian War of 1857, which affected her imagination deeply and haunted her dreams. Only eleven years old, her drawings from this time depict women and children fleeing. By age seventeen, she worked skillfully with watercolours and ink, and had won many awards for her artwork.

Greenaway attended the Royal Academy of Art in 1858 and continued to establish herself as an artist, inspired by the Pre-Raphelite Brotherhood. She sold her art on greeting cards and was commissioned by numerous publications continuously, especially to illustrate children's books. Fashion and art circles began recognizing her name and she developed a life-long friendship with John Ruskin, but her big break came when she published her own book.

Greenaway paid careful attention to the clothes that children wore in her books. The fashions harkened back to earlier days, before Industrialization in the 1830s. To get the right looks for the children's clothes, Greenaway designed the dresses herself and used dolls, or had children model them for her drawings. Rather than seeing the styles at old fashioned, Greenaway's readers and their parents idealized them, treasuring their simple innocence. This view was reflected in the fashion industry; Liberties of London developed a clothing line directly inspired by Greenaway's art. Clothing and shoe manufacturers approached Greenaway seeking permission to put her name on their products.

During her career, Greenaway illustrated more than 150 books, but Under the Window and Marigold Garden (1885) are the only two for which she provided both the pictures and the text. Under the Window was groundbreaking as one of the earliest designer picture books, and its popularity caused it to be imitated. Other publishers began copying its style within weeks of its release.

From my own childhood, I remember Kate Greenaway's Doll Book (1987). The book provides tips and patterns for making doll clothes inspired by Greenaway's books. I had little sisters and wanted to make clothes for their dolls, even though I was outgrowing dolls by that time. They say that she was one of the three most popular creators of children's books in the late nineteenth century, but I think she was the most influential of her day.