Snuff and Nonsense: Tobacco in the 1890s

Jack.  Well, yes, I must admit I smoke.
Lady Bracknell.  I am glad to hear it.  A man should always have an occupation of some kind.  There are far too many idle men in London as it is. 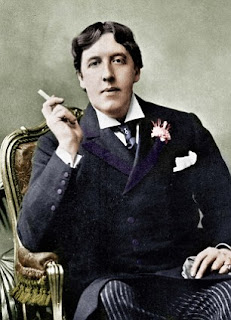 This blog debuted with a post about cigarettes. Cigarettes themselves were an invention of the nineteenth century. Though the Mayans were using tobacco in the ninth century, tobacco wasn't rolled in fine paper until it went to Spain in the seventeenth century. The Spanish called this a 'papelate.' A papelate went to France in 1830, where they called it a cigarette. French people and cigarettes were two of Oscar Wilde's favourite things. In a letter to his brother, he once said: "Charming people should smoke gold-tipped cigarettes or die."

While Oscar's father may have enjoyed the ocassional cigarette, he probably preferred snuff. Long before Oscar Wilde and the cigarette, the ritualistic habits of tobacco users appealed to Europeans all over the world.


Snuff's associations with fashion made it irresistible to British society, whose fondness for rules and tendency to develop tobacco rituals led them to develop a complex etiquette for snuffing, against which they could measure the relative social rank, or intellectual potential, of a stranger. An example is provided by that venerable chronicle of idiocy, the Tatler: 'I cannot see either his person or his habit in his letter, but I shall call at Charles [Charles Lillie, a French perfumer and snuff seller] and know the shape of his snuff box, by which I can settle his character.' -- Iain Gately, "Tobacco: A Cultural History of How an Exotic Plant Seduced Civilization" (2001).

Smoking cigarettes, gold-tipped or otherwise, didn't really catch on until the 1880s, after an American made pre-rolled cigarettes cheaper. James Bonsack lived in Virginia, where his father operated a woolen mill. By tinkering with one of the carding machines from his father's factory, Bonsack created a cigarette rolling machine, capable of producing ten thousand cigarettes per hour.  To put that number in perspective, in an 1897 cigarette rolling contest, the "Queen of the hand-rollers," Lily Lavender rolled 162 cigarettes in thirty minutes. All cigarettes were rolled by hand, until Bonsack got the patent on his machine in 1881.

James Duke of W. Duke Sons and Company in Durham had 125 hand rollers producing 250,000 cigarettes a day, when his company tried the Bonsack cigarette machine in 1883. One machine could do the work of 48 people, but other companies were reluctant to try it because they thought people preferred hand-rolled cigarettes; this allowed Duke's company a chance to be the first. By 1888, Duke replaced all of his company's hand-rollers with machines.

By the 1890s, French and British cigarette companies were using various types of cigarette rolling machines, which lowered the cost of cigarettes everywhere. Their popularity increased at this new lower price, so that in the 1890s younger men smoked, whereas older men might have still been attached to the habit of snuff.

Many women, especially feminists who were fighting against social convention, smoked. Though it was typically frowned upon for them to do so in public, its reported that many celebrity women were smoking at the opening of the Dorothy Restaurant on Oxford Street in June 1889.

In Robert Proctor's "Golden Holocaust: Origins of the Cigarette Catastrophe and the Case for Abolition" (2011), Bosnack's smoking machine is partially responsible for setting off the smoking epidemic. Perhaps, as Lady Bracknell says in "The Importance of Being Ernest" (1895) there were far too many idle people in London; idle hands are, as they say, the devil's workshop.