The second and final paragraph of this letter from Oscar Wilde to his brother in 1893 might be my favorite Wildism ever. Oscar Wilde's reputation as a chain smoker sticks with him to this day. Apparently, his aesthetic tastes extended to cigarettes as well. Though his brother, Willie Wilde, was not an aesthete, he was as much of a chain smoker as Oscar. This letter emphasizes the difference in their tastes or standards regarding cigarettes. 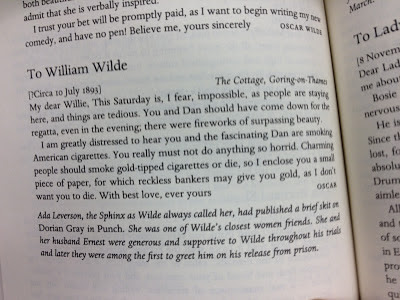 
I am greatly distressed to hear you and the fascinating Dan are smoking American cigarettes. You really must not do anything so horrid. Charming people should smoke gold-tipped cigarettes or die, so I enclose you a small piece of paper, for which reckless bankers may give you gold, as I don't want you to die.

* While looking at photos for my entry on Hairy Men, I found a picture that named a brand Oscar may have recommended: Ogden's Guinea Gold Cigarettes, but I can't find any reference as to when these were first produced.