The No-Nose Club and Victorian STDs 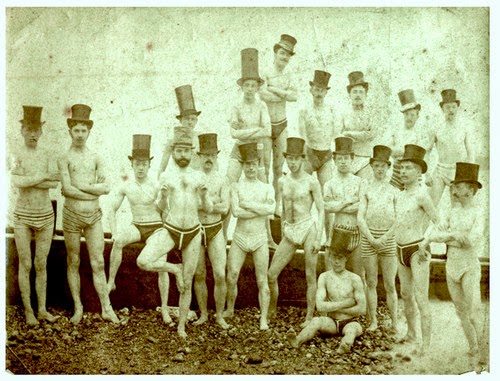 Speaking about disease within the context of sexual identity, the first that come to mind are sexually transmitted diseases (STD). Other diseases also play a big role in how we identify as sexual human beings across gender lines. Illness even makes us feel irresponsible today: not just blaming ourselves for getting sick, but also feeling that we should have been better prepared for such an event. Consequently, health plays a huge role in any person's sexual identity, as does the fear of getting sick.

Victorian, and other historical, illnesses are approached with hindsight, and we can't talk about sexual identity and disease without talking about STDs. From where I sit, literary historians like to read the most common Victorian STDs onto historical figures. Oscar Wilde did not die of syphilis; there's also no solid emphasis that Bram Stoker had it. Yet, we seem obsessed with reading these diseases onto our beloved authors.

Things were quite different at the time.

'Morality' was central to the very heterosexist racist society that was London, and the rest of the English-speaking world, in the 1890s. Morality was a concept they used to condemn the things they didn't like, including sex, women, foreigners, poverty, and disease.

One of the most outstanding examples of how Victorians used illness to shame the sick is Max Nordau's Degeneration (1895).

A race which is regularly addicted, even! without excess, to narcotics and stimulants in any form (such, as fermented alcoholic drinks, tobacco, opium, hashish, arsenic, which partakes of tainted foods (bread made with bad corn, which absorbs organic poisons (marsh fever, syphilis, tuberculosis, goitre), begets degenerate descendants who, if they remain exposed to the same influences, rapidly descend to the lowest degrees of degeneracy, to idiocy, to dwarfishness, etc. That the poisoning of civilized peoples continues and increases at a very rapid rate is widely attested by statistics.

Degeneration was translated to English three years after its initial publication, and introduced to London at a time when they were starting to talk more seriously about STDs.  Coincidently, 1895 is the same year Wilde went to prison. The book maintained ideas that were popular outside the bohemian set; chiefly, that lust was incompatible with intellect and artistic genius.

If the statistics Nardau refers to existed, they were, at best, misleading. Victorian doctors did not yet possess the means of accurately diagnosing STDs, and were as likely to overlook STDs, as they were to over-diagnose them. Wealthier people would have been seen outside of hospitals, and could expect their doctors to be discreet. Autopsies usually only superficially identified cause of death, such as which organs failed, though they might not know why.

They knew that STDs existed, and primarily blamed prostitutes, as is evidenced by the Contagious Diseases Acts, originally passed in parliament in 1864. 'Blame' is even too light a word, in this context. If a female sex worker was believed to have a STD, she would be locked away in a special hospital, until 'cured' - only there wasn't enough room in these Lock Hospitals (that's actually what they were called), so she was more likely to end up in a workhouse infirmary. Those laws were repealed in 1885, but the prevailing attitude toward sex workers and disease hadn't really changed by the 1890s.

Still, I am trying to talk about how STDs impacted a man's sexual identity in the 1890s. The state didn't do anything to the men, who had slept with the infected sex workers. In one sense, these men were left to fend for themselves, to find their own treatment. I don't know how many saw doctors. Their doctors were very discreet, after all. More realistically, they continued sleeping with sex workers, and spreading their infections.

The idea of catching an STD would have been terrifying, and a little unbelievable. As I've mentioned before, sex education wasn't very popular yet, and rumours were abundant. Indicative, of what men imagined from an STD was the No-Nose Club, which Linda Dowling calls, "an imaginary assembly of beakless sufferers of syphilis." They imagined that the signs of such terrible diseases would be quite obvious.


The third great plague is syphilis, a disease which, in these times of public enlightenment, is still shrouded in obscurity, entrenched behind a barrier of silence, and armed, by our own ignorance and false shame, with a thousand times its actual power to destroy. . . . It is one of the ironies, the paradoxes, of fate that the disease against which the most tremendous advances have been made, the most brilliant victories won, is the third great plague, syphilis the disease that still destroys us through our ignorance or our refusal to know the truth. (Source)

Shame kept people from getting treatment, so people died from their illnesses. Our beloved Mrs Beeton, of the  popular household management book, a pillar of society, died of syphilis, contracted from her husband. It may have also killed her first two children. I mention Mrs Beeton because her case demonstrates that there is no shame in getting sick. She bought into Victorian morality wholeheartedly, and it did nothing to save her.

Lee Jackson tells the story of another innocent woman, who died of syphilis, and concludes: "Who could have seen that hapless, unoffending victim to her woman's trust and man's barbarity, hurried to an early grave, without asking himself could such a one have been marked out for example and for punishment by a discerning Providence, as some would tell us?"

If you enjoy the work that I do, support my Victorian Dictionary Project!
Posted by Tine Hreno at 9:43 AM