Facial hair is the first thing that comes to mind about how Victorian men looked. Men styled their facial hair as elaborately as women styled their hair. As it is today, hair was important to Victorian men, and the market knew it. Men could buy elixirs to prevent or cure hair loss, to make their mustaches and beards grow faster, or to hold them in place. Special tea cups and spoons were designed for mustaches. Contraptions were being invented to curl a man's mustache; others were intended to hold it in place after it was curled. Lead combs promised to get rid of grey hairs by dying them black.

I've already begun to address body image, in my post on the perfect man. While women's fashion was beginning to realize that women's clothing was so constrictive that women couldn't move, Eugen Sandow's role as the perfect man illustrated that a man's ideal body emphasized function, as well as form. The form of a man's body indicated the feats of strength he was capable of performing.

Strong women, like Mary Arniotis, existed, but Arniotis was the exception. She was born into a circus family, and little is know about her life, but her most famous photo is done in the style of the strong man.

Sandy became the founder of body building as a sport, and based the ideal measurements for a male body on classical statues, often posing for cabinet cards as if he were a statue himself.

Clearly, Sandow didn't invent the 'classical' male form. In the late-18th and early-19th centuries, men wore corsets to artificially achieve the ideal shape. By the 1890s, they were using electric belts, though the tone in advertisements for these belts emphasize fitness, health, and as a cure for "weakness."

Exercise, the way we do it at a gym, increased in popularity by the 1890s, especially at spas, like the Zander Institute in Stolkhome, where wealthy Londoners could go to get healthy by using machines like these: 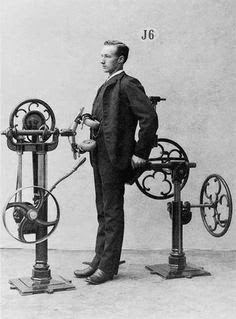 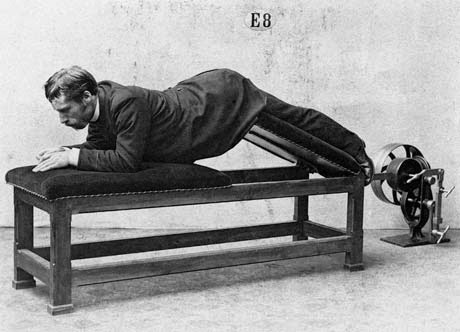 These institutions of health treated everything that ailed the 1890s Londoner, including obesity.

Doctors, who studied obesity in the 19th-century, were already beginning to acknowledge the problem of medical professionals refusing to treat obese patients. Doctors, like Horace Dobell, Isaac Burney Yeo, and John Ayrton Paris were already making the connection between obesity, diet, and a sedentary lifestyle. As early as 1825, those struggling with their weight were warned against trusting fad diets, but people were still doing whatever it took to get the ideal shape, even when their efforts were in vain.

Another aspect of body image is fashion. For as long as it has existed, fashion has played an important part in human sexuality. In the late-19th century, women's accessories were fetishized and used for flirting, and cross-dressing was something loads of middle-class Victorians wanted to do in front of a camera. If he couldn't lift a family of six, a gentleman could still demonstrate his ability through his status, indicated through the number and quality of coats he wore. A man's coat could indicate his interests, his social status, and his ability to provide for a family. As illustrated by the photos above, clothing played a huge role in gender, and they knew it!

Cross dressing happened in literature, and theatre, where the clothes defined the person's gender. In stories, a woman could put on her brother's clothes, and make everyone think she was him.

So it was the clothes and ability to pick things up that made the man in terms of body image. Soon, I will follow up with a post about who Victorian men wanted to 'pick up.'

If you have enjoyed the work that I do, please consider supporting my Victorian Dictionary Project!
Posted by Tine Hreno at 1:17 PM