The man believed to have uttered the phrase: "Dr. Livingstone, I presume?" Henry Morton Stanley (1841-1904) was considered, by many of his British contemporaries, to be the greatest explorer of Africa. On 26 June 1890, Bram Stoker was invited to a dinner by Edward Marston (his publisher) in honour of Stanley. For Bram, this was a night to remember. His recollections of the evening and of Stanley provide valuable insight into Bram and his perception of the world.
Bram's father believed his sons fortunes could lie in the exploration of Africa. Abraham Stoker Sr. was something of a pencil pusher and pushover. He didn't want his sons to grow up like him and the exploration of Africa was one of the many thing he dreamed of them doing. Bram never went to Africa, but his father's dreams probably put the continent somewhere on the list of places he would like to go.

The possibility of going to Africa crops up in Bram's reminiscence of the June 26th dinner, as does the way that he saw life and death in people that he met. Of that night, Bram wrote:

The dinner given to Stanley by Edward Marston, the publisher, on the eve of bringing out Stanley's great book, In Darkest Africa June 26, 1890 was a memorable affair. Marston had then published two books of mine, Under the Sunset, and the little book on America, and as "one of his authors " I was a guest at the dinner. Irving was asked, but he could not go as he was then out of town on a short holiday, previous to commencing an engagement of two weeks at the Grand Theatre, Islington, whilst the Lyceum was occupied by Mr. Augustin Daly's company from New York. 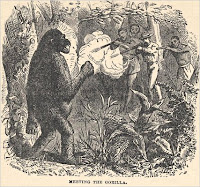 At the dinner I sat at an inside corner close to Sir Harry (then Mr.) Johnston, the explorer and administrator, and to Paul B. du Chaillu, the African explorer who had discovered gorillas. I had met both these gentlemen before ; the first in London several times ; the latter in New York, in December 1884, in the house of Mr. and Mrs. Tailer, who that night were entertaining Irving and Ellen Terry. There we had sat together at supper and he had told me much of his African experience and of his adventures with gorillas. I had of course read his books, but it was interesting to hear the stories under the magic of the adventurer's own voice and in his characteristic semi- French intonation.

In the course of conversation he had said to me something which I never have forgotten it spoke volumes : "When I was young nothing would keep me of out Africa. Now nothing would make me go there !"

In reply to the toast of his health, Stanley spoke well and said some very interesting things : "In my book that is coming out I have said as little as possible about Emin Pasha. He was to me a study of character. I never met the same kind of character." Again : "I have not gone into details of the forest march and return to the sea. It was too dreary and too horrible. It will require years of time to be able to think of its picturesque side."

At that time Stanley looked dreadfully worn, and much older than when I had seen him last. The six years had more than their tally of wear for him, and had multiplied themselves. He was darker of skin than ever ; and this was emphasised by the whitening of his hair. He was then under fifty years of age, but he looked nearer to eighty than fifty. His face had become more set and drawn had more of that look of slight distortion which comes with suffering and over-long anxiety. There were times when he looked more like a dead man than a living one. Truly the wilderness had revenged upon him the exposal of its mysteries.

Edward Marston, Harry Johnston, Paul B. du Chaillu, Ellen Terry... As you can see by this excerpt, Bram liked name-dropping. Bram uses Stanley's view to justify not going to Africa. The darkening of Stanley's skin could be a nod to a commonly held belief in environmental determinism. Moreover, this passage also recalls Bram's depictions of Dracula and how his age changed the more he fed.

In Stanley's defense, I've placed a photograph of him from 1890, the year of that dinner. His hair certainly is much whiter than pictured above, but he doesn't look that much older!
Posted by Tine Hreno at 11:29 AM