Hermetic Order of the Golden Dawn

Interest in alternative spirituality and the occult peaked before the Second World War, but mysticism was already becoming popular in the late-Victorian period, after the Darwinian Revolution.

In the 1890s, Bram Stoker was involved in an occult-like spiritualist organization, called the Hermetic Order of the Golden Dawn. This mystic order was shrouded in secrecy. Indeed, the order threatened to ruin people's lives, if they revealed its secrets to outsiders. However, its hermetics were based on things people  thought of before, like Freemasonry, the religion of ancient Egypt, alchemy, and tarot cards. 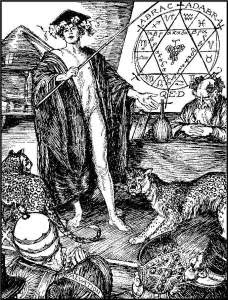 Other members of the Order included W.B. Yeats, Algernon Blackwood, and Oscar Wilde's wife: Constance. A new biography, Constance: the Tragic and Scandalous Life of Mrs. Oscar Wilde, goes into great detail of Constance's experiences with the Order and how being among the first to join elevated members' positions. Digging Hermetics in the 1890s got you in on the ground floor, so-to-speak, because the movement was young and still under the direction of it's founder William Wynn Westcott.

In October 1887, Westcott wrote to Anna Sprengel, whose name and address he received through the decoding of the Cipher Manuscripts. Westcott claimed to receive a wise reply which conferred honorary grades of Adeptus Exemptus on Westcott, and his fellow Freemasons Samuel Liddell MacGregor Mathers, and William Robert Woodman and chartered a Golden Dawn temple consisting of the five grades outlined in the manuscripts. Anna Sprengel died four years after helping to found the order.

Anna Sprengel, countess of Landsfeldt, love-child of Ludwig I of Bavaria and Lola Montez, may never have existed at all, as there is no proof of her existence and it now seems she was invented by Westcott to confer legitimacy on the Golden Dawn (although I'm not sure how the support of imaginary people confers legitimacy on anything). In 1901 Mathers, leader of the Golden Dawn, briefly supported the claim of Swami Laura Horos, who had long campaigned for recognition as that countess, to have written Westcott as Anna Sprengel.

Regardless, I think it could have been the order and organization within the Hermetic Order of the Golden Dawn that provided orderliness to previously unruly creatures, specifically Bram Stoker's vampires. Anna Sprengel was supposedly a countess and Bram's vampires were led by a count. I don't know of any other interpretations of vampires that require devotion and worship, like Renfield has for Dracula:


"I am here to do your bidding, Master. I am your slave, and you will reward me, for I shall be faithful. I have worshipped you long and afar off. Now that you are near, I await your commands, and you will not pass me by, will you, dear Master, in your distribution of good things?"