I found this picture on Flickr. It's a view of Fleet Street in the 1890s. 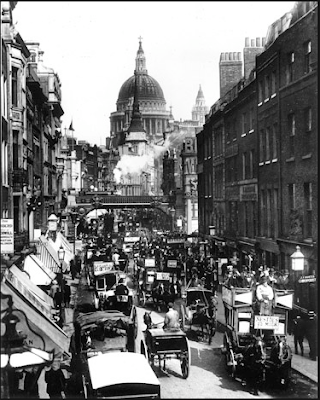 Upon closer examination (or rather by taking a few steps back in the photo below), what looks like tents along the sidewalk on the left side actually appear to be the awnings of various shops. 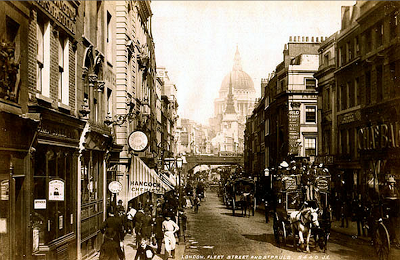 We can already see the electric lights; before the end of the decade, London would have it's first electric taxis, which were, for obvious reasons, referred to as horseless carriages. 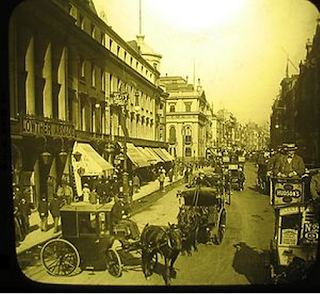 It's funny to think how much the street must have changed in such a short time. Those early electric taxis were set up so that the passenger could cover up the windows because many people wanted to ride in them, but didn't want to make a spectacle out of themselves.

I'm thinking about this place because, as I mentioned in my previous entry, Fleet Street was the location of news reporting. Highly imperialistic tones characterize journalistic writing of the era. With all of these changes happening and the architecture in the background, it is easier to see why. Today, as writers, we are told to write about what we know. Newspaper journalists in the 1890s knew this place well.
Posted by Tine Hreno at 6:29 PM