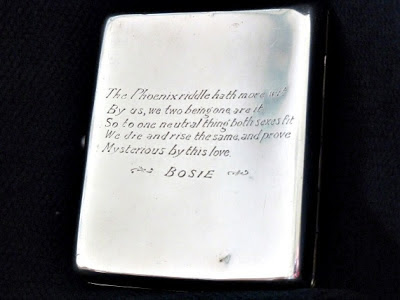 The following is one of my many favorite scenes from the Importance of Being Earnest.


Algernon. Bring me that cigarette case Mr. Worthing left in the smoking-room the last time he dined here.

Jack. Do you mean to say you have had my cigarette case all this time? I wish to goodness you had let me know. I have been writing frantic letters to Scotland Yard about it. I was very nearly offering a large reward.

Algernon. Well, I wish you would offer one. I happen to be more than usually hard up.

Jack. There is no good offering a large reward now that the thing is found.

[Enter Lane with the cigarette case on a salver. Algernon takes it at once. Lane goes out.]

Algernon. I think that is rather mean of you, Ernest, I must say. [Opens case and examines it.] However, it makes no matter, for, now that I look at the inscription inside, I find that the thing isn’t yours after all.

Jack. Of course it’s mine. [Moving to him.] You have seen me with it a hundred times, and you have no right whatsoever to read what is written inside. It is a very ungentlemanly thing to read a private cigarette case.

Jack. I am quite aware of the fact, and I don’t propose to discuss modern culture. It isn’t the sort of thing one should talk of in private. I simply want my cigarette case back.

Algernon. Yes; but this isn’t your cigarette case. This cigarette case is a present from some one of the name of Cecily, and you said you didn’t know any one of that name.

Jack. Well, if you want to know, Cecily happens to be my aunt.

Jack. Yes. Charming old lady she is, too. Lives at Tunbridge Wells. Just give it back to me, Algy.

Algernon. [Retreating to back of sofa.] But why does she call herself little Cecily if she is your aunt and lives at Tunbridge Wells? [Reading.] ‘From little Cecily with her fondest love.’ 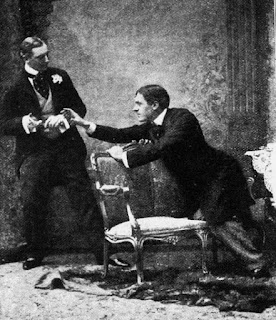 Jack. [Moving to sofa and kneeling upon it.] My dear fellow, what on earth is there in that? Some aunts are tall, some aunts are not tall. That is a matter that surely an aunt may be allowed to decide for herself. You seem to think that every aunt should be exactly like your aunt! That is absurd! For Heaven’s sake give me back my cigarette case. [Follows Algernon round the room.]

Algernon. Yes. But why does your aunt call you her uncle? ‘From little Cecily, with her fondest love to her dear Uncle Jack.’ There is no objection, I admit, to an aunt being a small aunt, but why an aunt, no matter what her size may be, should call her own nephew her uncle, I can’t quite make out. Besides, your name isn’t Jack at all; it is Ernest.

It's even a more interesting read, now that I know that Oscar Wilde really was writing about himself and his brother in this play. In writing it, Oscar saw himself as Jack and his brother, Willie, as Algernon. It's interesting, to me, that Oscar paints himself on the receiving end of a cigarette case as a present, when he was known to give them as gifts, especially to his male lovers. Interesting too that the cigarette case that he was given exposes his secret.

Before Importance of Being Earnest went on stage, Oscar had to testify about cigarette cases before the courts, during his infamous trials.

Mr. C. F. Gill--You made handsome presents to all these young fellows?

Oscar Wilde--Pardon me, I differ. I gave two or three of them a cigarette case: Boys of that class smoke a good deal of cigarettes. I have a weakness for presenting my acquaintances with cigarette cases.

Mr. C. F. Gill--Rather an expensive habit if indulged in indiscriminately, isn't it?

Oscar's weakness for presenting people with cigarette cases was performed as a sign of affection. It's a quiet aim of mine to keep all of this month's posts on the romantic side and I do like this idea that Oscar had a sort of trademark gift for his friends.

It's also nice to know that some people gave him cigarette cases in return. Two years ago, the cigarette case Oscar got from Bosie was displayed at the BADA Antiques and Fine Art Fair and is pictured (below). 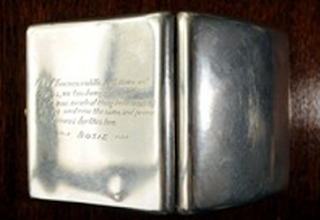