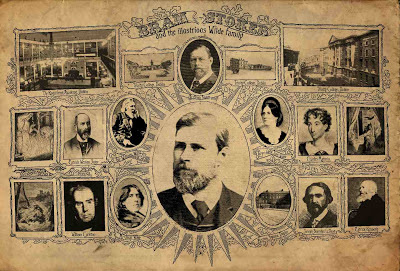 One of the most romanticized stories of Oscar Wilde's life is that of his relationship with Bram Stoker's wife, whose maiden name was Florence Anne Lemon Balcombe. The story goes like this: Wilde and the future Mrs. Stoker were sweethearts; Wilde's mother asked Stoker to tutor Wilde in his studies at Trinity college; Stoker stole Wilde's girlfriend; brought her to London; and ran the most successful theatre in town, while Wilde wrote plays and married someone else, then started having sex with men.

Some suppose that Wilde began writing plays to renew Mrs. Stoker's affection for him because he knew she fancied herself an actress Sadly, so many pieces of the puzzle are missing, but I don't like how contemporary scholars demonize poor Florrie. Just now, I read in Barbara Belford's book that: 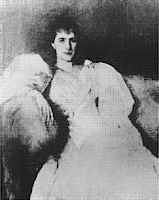 At the time of Wilde's trials in 1895, Florence was vainly preoccupied; her portrait by Walter Frederick Oscborne, a well-known Dublin artist, was shown at the Royal Academy's summer exhibition. "One of the very best portraits of the year, if not really the best,"The Atheneaum noted, "is that of Mrs. Bram Stoker, sitting upon a white bearskin, with a warm grey background and mainly in half-tone." Draped in fur, Florence looks positively feral. Stoker accepted congratulations all around: for Irving, for his brother, for his wife. For Wilde there was only silence.

Some details that I think are important, when we judge Mrs. Stoker on her treatment of Wilde, are:

I'm certainly not going to speculate or comment on that last point, except to say that I think that it acknowles that Wilde and Mrs. Stoker would have been a love match. I accept the premise that Mrs. Stoker was a vain social climber, but so was Wilde and nothing is ever that simple. Remember, Wilde almost had his portrait painted the night before he went to trial! It is a picture worth a million pounds! 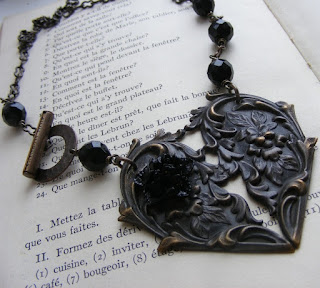 I'll just linger a moment longer to imagine there is any significant correlation between the timing of Mrs. Stoker's portrait and the trials of Oscar Wilde. In today's world, bad news means high profits for the cosmetics industry; lipstick sales go through the roof, when people are depressed. Lipstick is an easy way for one to feel better about oneself, especially if you are a girl. If Mrs. Stoker was sad, don't you think having a portrait done for the Royal Academy's summer exhibition would cheer her up? I think it would.

I think it's possible that Poor Florrie's poor heart was breaking for Poor O and she had no way of expressing it. The trials themselves were an example of what could happen when one engaged in a love that dare not speak its name.