This trade card pictures Oscar Wilde on the right wearing a sunflower and obviously promotes sturdy corsets. It's interesting for a few reasons. 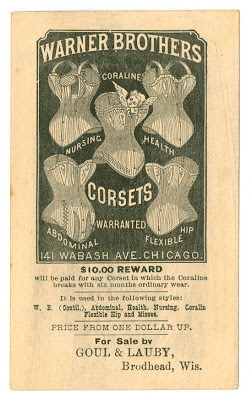 1. It was either printed before he and Constance were married; before he became editor of Woman's world and indicates a shift in his perspective on the rational dress movement OR it was printed without his consent to cash in on some of the pomp and circumstance of one of Oscar Wilde's American tours.

3. The card tries to link wearing a corset to the aesthetic movement, when the opposite was true.

Victorian trade cards were about the size of a 3x5 index card. Like the one pictured here, they typically had a picture with a slogan on one side and advertising text or testimonials on the other side. Most of them date back between 1880-1900. Merchants and their employees would hand the cards out on the street to advertise products and services. A local store would sometimes stamp their name on the back.

Some trade cards were beautiful, some funny, some had puzzles, and some were risque. People would collect the many different cards that appealed to them and paste them into scrap books. I found this one on eBay; where it sold for eight dollars.