The latest news about writers in London in the 1890s comes in the form of a forgotten letter by Oscar Wilde to an unknown Mr. Morgan. The advice in the letter (what has been shared so far) can be taken several ways, but I like to relate to my predecessors from across the sea. 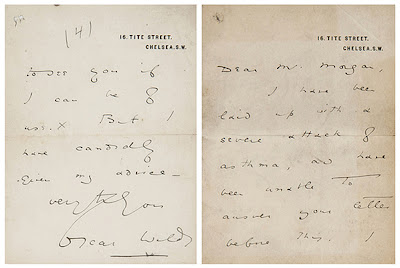 
The best work in literature is always done by those who do not depend on it for their daily bread—and the highest form of literature, Poetry, brings no wealth to the singer… Make some sacrifice for your art and you will be repaid—but ask of art to sacrifice herself for you and a bitter disappointment may come to you.

This is the kind of advice I would have given, during my last days as a staff writer for a magazine when my daughter was small. It reminds me of the small sense of tragedy in needing to do what you always wanted to do. A short while later, I met a poet and confessed that I used to write. "What happened?" he asked. "I started working in journalism," was my reply.

Oscar Wilde indeed came to depend on the income that he earned through writing. Many of his surviving letters inquire of his publishers about advances. Many of his wife's letters ask her family for money. They were by no means poor in their time, but Oscar Wilde was true to his words:


Anyone who lives within their means suffers from a lack of imagination.

Sometimes, I can really relate to the Wildes.