The German Professor in Dracula

Remember the German professor, Max Windschoeffel, in Dracula? No? That's because there wasn't one. Bram Stoker wrote him out or, rather, let his character be absorbed into the Dutch vampire hunter, Van Helsing, along with other characters, including a detective. 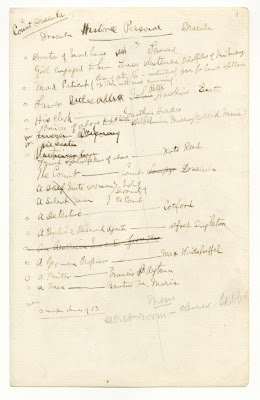 Stoker's "Historiae Personae," pictured above, resides at the Rosenbach Museum & Library in Philedelphia. It likely arrived in the United States through one of Stoker's many visits or when his wife, Florence, moved to the US, after his death.

The "Historiae Personae" shows the way that characters' roles changed and evolved during the writing and research process. Upon close examination, you can see how characters were changed and renamed throughout.

I also love how it problematizes the question of who the real-life inspiration for Dracula was. Scholarship on the question has speculated it could have been Oscar Wilde or Henry Irving.

If Van Helsing was originally supposed to be a German professor, a detective, a physical research agent, and even possibly a painter, it's likely that the vampire's character had many sources of inspiration as well. Henry Irving, Oscar Wilde, Jack the Ripper, and even Stoker himself are tossed around as inspiring Dracula all the time, but it's likely more true that parts of Dracula came from all of them and others as well.