Sir Henry Irving, Bram Stoker's employer, the occupation of most of his life, is popularly believed to be the inspiration for the character of Dracula.

One of many outrageous ideas, forwarded by the Victorians, was that a person's character could be summed up by the tip of their finger. In this 11 June 1898 article, Irving's fingerprint is used as an example of such analysis.

The article surmises many flattering things about Irving, who was a major celebrity at the time. Those, trying to advance the case for Irving as Dracula often echo the line about his "unlimited power of command," whatever that means.

Of Irving, the article claims to have read by his fingertip:


The finger print of Sir Henry Irving is strongly characteristic of the man. Extreme generosity is a marked feature; impulsiveness, determination, eloquence and desire for information, all these are marked items in the character of the print.

Sir Henry would approve of no wrong-doing, while his gentle nature proves his fairness in all things. He possesses unlimited power of command, and though he is always open to conviction, the operation of his mind works against the principle of accepting too much correction. His is the print of a successful man; fortune crowns the ridges, and upon close inspection it will appear patent to you that he is generally an even man in all his doings.

The article also provides analysis of the Lord Chief Justice of England, Sir Spencer Walpole, John Dunn, the city's mayor, and Edward Terry. It is pictured in full below. 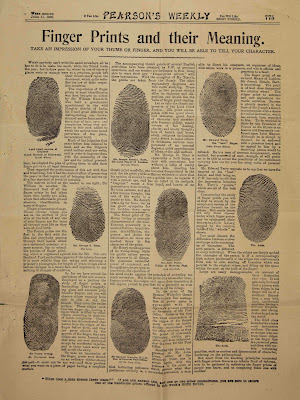