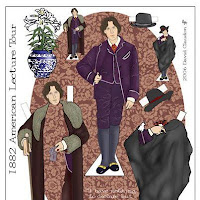 When we think of anarchy today, we think of someone who occupies a park, rather than someone who spends ages finely decorating his house before moving into it. Indeed, anarchy, today, is an ambiguous shape-shifting subject that changes from its uber intellectualized to something extremely subversive and counter-culture in the modern youth movement. However, while some Wildean scholars hesitate to draw the link between Oscar Wilde and anarchy, such a link exists - even if it is as tenuous as modern understandings of what anarchy means.

The Soul of a Man Under Socialism (1891) expounds Oscar Wilde's libertarian socialist (anarchist) worldview. There are loads of resources out there that analyze it, so I won't waist your time with it here. What interests me is how Oscar Wilde lived his views. He didn't attend protests and didn't write much on libertarian socialism after 1891. His focus was on the aesthetic movement and his life as an artist. As such, he saw himself as a leader of a sociopolitical movement, the aesthetic movement.

Though it's hard to imagine the links today, the minds of Victorian thinkers, like Wilde, linked anarchy, libertarianism, socialism, and other progress-based social-based political ideologies were linked to decadence. John Barlas (Evelyn Douglas) linked his anarchism to the decadence of Algernon Charles Swinburne in particular.

John Barlas and Swinburne both fit into the category of Writers in London in the 1890s. Algernon Charles Swinburne was a poet, playwright, novelist, and critic. Inventor of the roundel form, he wrote several novels and contributed to the Eleventh Edition of the Encyclopædia Britannica. Swinburne was nominated for the Nobel Prize in Literature in every year from 1903 to 1907 and again in 1909. H.P. Lovecraft felt that Swinburne was the only real poet in England, after the death of Edgar Allan Poe. Wilde once said that Swinburne was "a braggart in matters of vice, who had done everything he could to convince his fellow citizens of his homosexuality and bestiality without being in the slightest degree a homosexual or a bestialiser."

John Barlas was a long time friend of Wilde and his crowd, but, by the 1890s, he was one of those friends kept on the periphery. Interestingly, Oscar Wilde bailed him out of jail after an incident on 31 December 1891.

On that New Year's Eve, Barlas went to the Palace of Westminster and fired a revolver outside the Speaker's House, declaring: "I am an anarchist! What I have done is to show my contempt for the House of Commons." After more than two weeks in jail, it was through Constance that Oscar Wilde was reached to post a bond as surety for Barlas's good behavior.

According to David Lowe's book: John Barlas: Sweet Singer and Socialist (1915), en route, Henry Hyde Champion, secretary of the Social Democratic Federation and the publisher of Bernard Shaw's first novel, Cashel Byron's Profession (1886), informed Wilde that Barlas suffered from the delusion that he was a reincarnated figure from the Bible and believed that others recognized his significance by crossing their hands reverently as he passed. Wilde reportedly said to Champion: "My dear fellow, when I think of the harm the Bible has done, I am quite ashamed of it."

In response to Barlas's letter of gratitude for the bond, Wilde wrote that:


Whatever I did was merely what you would have done for me or for any friend of yours whom you admired and appreciated. We poets and dreamers are all brothers. I am so glad you are feeling better...

And just like brothers or sisters or anarchists today, these anarchists, among the Writers in London in the 1890s, were as diverse as anarchists that you might meet today. Even though Oscar Wilde wrote and lectured (before Barlas was arrested) that:


Individualism, then, is what through Socialism we are to attain to. As a natural result the State must give up all idea of government. It must give it up because, as a wise man once said many centuries before Christ, there is such a thing as leaving mankind alone; there is no such thing as governing mankind. All modes of government are failures. Despotism is unjust to everybody, including the despot, who was probably made for better things. Oligarchies are unjust to the many, and ochlocracies are unjust to the few. High hopes were once formed of democracy; but democracy means simply the bludgeoning of the people by the people for the people. It has been found out. I must say that it was high time, for all authority is quite degrading. It degrades those who exercise it, and degrades those over whom it is exercised.

Wilde had no intention of overthrowing the State and he had a deep and abiding respect for due process through the legal system. During his trials, his radical Irish Nationalist mother assured him repeatedly that their position in society would assure that he would not be found guilty of any crime. While Wilde's friends and even the judge encouraged him to flee, during his own trials, Oscar stayed and was inarguably broken by it.

If his political views weren't reflected in how Wilde died, he certainly felt that they were reflected in how he lived. Compared to his contemporaries, like Bram Stoker, I feel that Wilde was a feminist because he used Women's World magazine to support Constance Wilde's feminist ideas and incorporated healthy or rational dress into the aesthetic movement. A strong part of the aesthetic movement was about individualism, for Wilde. Self-governance was one extension of that individualism; the freedom of women was another extension. The freedom of workers was part of it as well, for through his mentor, John Ruskin, Wilde incorporated aspects of the Arts and Crafts Movement into the aesthetic movement. The Arts and Crafts Movement is reflected in women's art, in the aesthetic movement, especially pottery. Wilde's marriage to Constance, indeed, was intended to be an example of aesthetic life and the liberties Constance took, with Oscar's blessings and encouragement, were seen by other as scandalous as well as liberating.
Posted by Tine Hreno at 1:48 PM