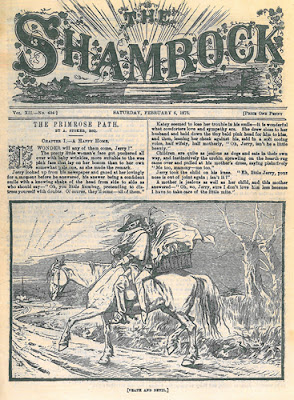 If every wife understood the merits which a cheerful home has above all places in the eyes of an ordinary man, there would be less brutality than there is among husbands, and less hardships and suffering among wives.

These words come from Bram Stoker's The Primrose Path, published in 1875 - just three years before his own marriage to Florence Balcombe, Oscar Wilde's sweetheart. Their marriage became platonic, after the birth of their son, though there's no evidence that he ever mistreated her. However, I might be a little standoffish too, if my husband weren't a feminist and wrote such misogynistic things as Stoker did:


...most women have a feeling of possible hostility, or, at least, maintain an armed neutrality towards the former flames of the man that they love. - The Primrose Path

His most popular work, Dracula is full of misogynistic assertions, such as:

I suppose that we women are such cowards that we think a man will save us from fears, and we marry him. I know now what I would do if I were a man and wanted to make a girl love me.

My dear Mina, why are men so noble when we women are so little worthy of them?

Hard to say what this means, but I don't think it's good:


These bans an' wafts an' boh-ghosts an' bar-guests an' bogles an' all anent them is only fit to set bairns an' dizzy women a'belderin'.


We had a capital 'severe tea' at Robin Hood's Bay in a sweet little old-fashioned inn, with a bow window right over the seaweed-covered rocks of the strand. I believe we should have shocked the 'New Woman' with our appetites. Men are more tolerant, bless them!

But, there, you can't trust wolves no more nor women.

A brave man's blood is the best thing on this earth when a woman is in trouble.

I tried to be stern with him, as one is to a woman under the circumstances, but it had no effect. Men and women are so different in manifestations of nervous strength or weakness!

She is one of God's women, fashioned by His own hand to show us men and other women that there is a heaven where we can enter, and that its light can be here on earth. So true, so sweet, so noble, so little an egoist, and that, let me tell you, is much in this age, so sceptical and selfish.

Misogyny, in my understanding, is derived from a fragile sense of masculinity, as Stoker demonstrates here:


I suppose there is something in a woman's nature that makes a man free to break down before her and express his feelings on the tender or emotional side without feeling it derogatory to his manhood.

Things are quite bad enough for us, all men of the world, and who have been in many tight places in our time, but it is no place for a woman, and if she had remained in touch with the affair, it would in time infallibly have wrecked her.

Think, dear, that there have been times when brave men have killed their wives and their womenkind, to keep them from falling into the hands of the enemy. Their hands did not falter any the more because those that they loved implored them to slay them. It is men's duty towards those whom they love, in such times of sore trial!

And misogyny in the form of a back-handed compliment:


And Stoker appears to loath women's sensuality and sexuality:


The women looked pretty, except when you got near them...

From that famous scene with one boy and three girls:


The women closed round, whilst I was aghast with horror.

And... as Lucy transforms into a vampire she begins walking around in various states of undress. She looks sexier when she's dead and they have to kill her by driving a phallic stake into her heart. Ok... maybe I'm going a bit far with the stake as phallic symbol, but you get the point. I think this is a case where Stoker speaks for himself.

The most insidious part of all of this is that many of these lines come from Stoker's female characters, which I immediately read as internalized misogyny, but really just serves to promote internalized misogyny by presenting these self-loathing women, whom Stoker regards as "noble."

I'm just glad that we eventually got Buffy!