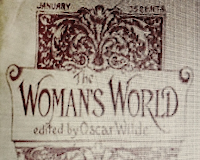 Fashion is such an essential part of the mundus muliebris of our day, that it seems to me absolutely necessary that its growth, development, and phases should be duly chronicled.

Oscar Wilde was editor of Woman's World Magazine from 1887-1889 and wrote the above in response to criticisms of the magazine's fashion pages. As a writer, trying to recapture some sense of the times, I'm incredibly grateful to those, like Wilde, who documented the frivolity of their times.

Wildeans often think of Oscar Wilde's love of ancient Greece in terms of how he idealized the ancient Greek approaches to men's sexuality, but we can see how he used the classics as models for women's lives as well, when we look at articles he published in Woman's World during those years, articles like “The Women of Greece,” “Woman and Democracy,” “Roman Women at the Beginning of the Empire,” and “A Pompeian Lady.”


The Woman’s World, edited by Mr. Oscar Wilde, gracefully got up as it is in every respect, has taken a high place among the illustrated magazines. Written by women, for women and about women, striking out an original line, it merited the success it has obtained. - The Times (December 1888)

Readers followed social issues and philanthropy and were overwhelmingly feminist. Of course, with Oscar Wilde at its helm, Woman's World became associated with aestheticism, but it was also linked to women in pursuit of higher education.

Something new that I learned today is the an 1880s and 90s synonym for the "New Woman" was "Girton Girl" because Girton referred to England's first residential college for women, established in 1869. Annie Edwards published a novel called A Girton Girl (1885), which has been digitized by Google, and was published in three volumes, dealing with many of the themes of a late-Victorian New Woman's life. 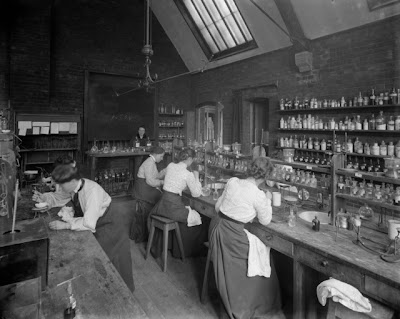 A laboratory at Girton College Cambridge (1900)


New Women and decadent artists were linked together as twin monsters of a decadent age, sexual anarchists who blurred the boundaries of gender.

I imagine them as very well-dressed and likable monsters, which reminds me that I started this tangent thinking about what my protagonists would wear to a very formal dinner party in 1889/90. 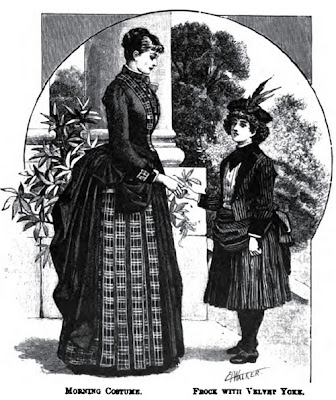 Toward this end, Oscar Wilde called upon the ancient Greeks and wrote in  Woman's World that women could follow the ancient principles of Greek dress by suspending their dresses from their shoulders, even with sleeves, thereby creating rich and rippling folds.

Most of the information in this post comes from my own research and an essay by Isobel Hurst "Ancient and Modern Women in Woman's World."