Sexton Blake and the Penny Dreadful 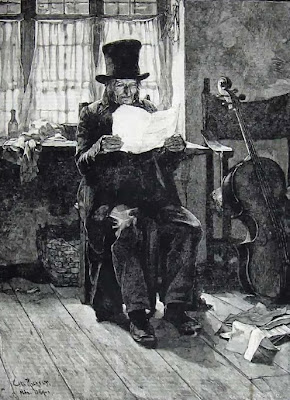 I could here and there see the reflection of light from the window of some student, who was busy at his studies, or throwing away his time over some trashy novel, too many of which find their way into the trunks or carpet-bags of the young men on setting out for college. - William Wells Brown on his visit to Oxford in 1850.

Those were also the days of Edmund Gosse’s terrible childhood.


No fiction of any kind, religious or secular, was admitted into the house. In this it was to my Mother, not to my Father, that the prohibition was due. She had a remarkable, I confess to me still somewhat unaccountable impression that to 'tell a story', that is, to compose fictitious narrative of any kind, was a sin. - Gosse, Father and Son (1907) 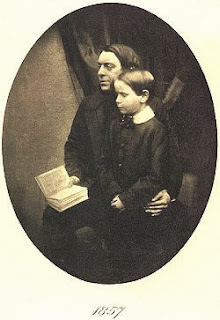 In consequence of the stern ordinance which I have described, not a single fiction was read or told to me during my infancy. The rapture of the child who delays the process of going to bed by cajoling 'a story' out of his mother or his nurse, as he sits upon her knee, well tucked up, at the corner of the nursery fire—this was unknown to me. Never in all my early childhood did anyone address to me the affecting preamble, 'Once upon a time!' I was told about missionaries, but never about pirates; I was familiar with hummingbirds, but I had never heard of fairies—Jack the Giant- Killer, Rumpelstiltskin and Robin Hood were not of my acquaintance; and though I understood about wolves, Little Red Ridinghood was a stranger even by name. So far as my 'dedication' was concerned, I can but think that my parents were in error thus to exclude the imaginary from my outlook upon facts. - Gosse, Father and Son (1907)

Though Gosse was a child in the 1850s, his upbringing was a sign of things to come. By the 1860s, certain types of fiction were considered incredibly dangerous, especially the sensation novel. Drawing from gothic and romantic literary fiction, the sensation novel appealed to the uncultured masses through shocking themes, like adultery, theft, kidnapping, insanity, bigamy, forgery, seduction, and murder. Other than relying on shock and awe, sensation novels separated themselves from other more respectable genres by using common settings familiar to their poorer middle- and working- class audiences. 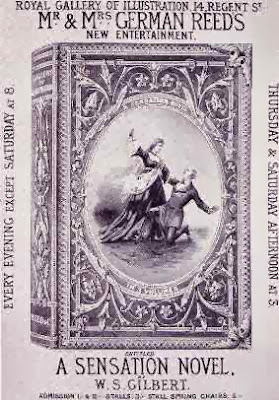 By the 1880s, the sensation novel was replaced by the ‘penny dreadful,’ known as ‘dime novels’ in the United States. Stanford's Dime Novel and Story Paper Collection celebrates the era, which “benefited from three mutually reinforcing trends: the vastly increased mechanization of printing, the growth of efficient rail and canal shipping, and ever-growing rates of literacy.” 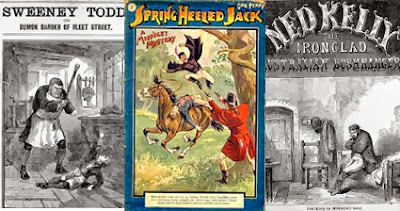 I’ve always thought of these as serial novels, published in story-based (I hesitate to use the word literary) publications. Again, their low price made them accessible to the uncultured reading masses, filling their minds with the kind of trash Mother Gosse sought to protect her son from in the 1850s. 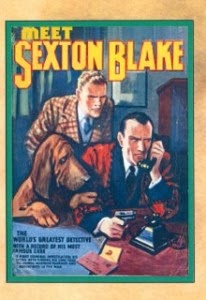 In the 1890s, the British newspaper and publishing magnate, Alfred Harmsworth, decided to take on the corrupting influence of the penny dreadfuls, but wound up creating the same thing for less: The Half-penny Marvel, The Union Jack and Pluck, all priced at a half-penny. A.A. Milne once said, "Harmsworth killed the penny dreadful by the simple process of producing the ha'penny dreadfuller." But Harmsworth made some thing wonderful happen.

Meet Sexton Blake, who, in the 1890s, was known as “the poor man’s Sherlock Holmes.” Though written by many hands (Harmsworth owned the rights), the first Sexton Blake story, “The Missing Millionaire,” was published on 20 December 1893 and really sought to capitalize on the popularity of Sherlock Holmes, who Arthur Conan Doyle was already getting tired of writing about.

Like Sherlock Holmes, Sexton Blake was a consulting detective operating out of Baker Street. Blake’s Watson is called Tinker, who didn’t appear until 1904 and is more like Batman’s Robin. Blake’s love interest is Yvone Cartier and his housekeeper is Mrs. Bardell. Blake is a little more clean-cut than Holmes, but is actually an educated medical doctor, like the real Sherlock Holmes. 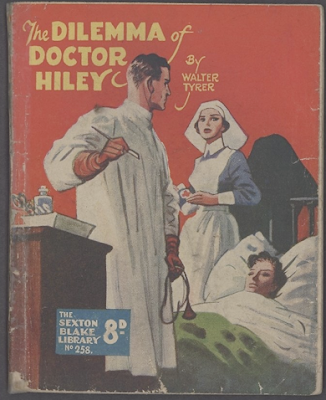 The Sexton Blake franchise continued on through the 1960s and the official fan website calls for a revival in the 21st century.

So why was Sherlock Holmes considered literature, while Sexton Blake was considered trashy? My focus is on the 1890s, so I’m not going to comment on what might have happened to the franchise in the 20th century, but the fact that it actually was a franchise might have had something to do with it. Maybe having multiple authors had something to do with it? During my undergraduate degree, I took a class, in which we read novels of many shapes, my fellow students found that they had a lower opinion of what a book would be like, based on its shape. If it looked like a Harlequin romance book, they expected it to be trashy. They were often surprised by what they found inside. Maybe readers in the 1890s didn’t take Blake seriously because of the cheap quality of the publications?