How to Raise a Horror Writer 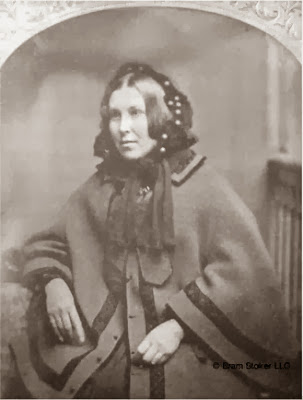 Bram Stoker was a sickly child and spent a lot of time in bed, while his loving Irish mother, Charlotte Mathilda Blake Thornley (hereafter referred to as "Mother Stoker") entertained him with stories. Many of her stories were oral histories, the kind that the Brothers Grimm sought out in Germany, the kind that appeared in Speranza's Ancient Legends many years later. Sometimes, Mother Stoker would tell little Stoker about the horrors of the potato famine, as he drifted off to sleep other times the stories came from her own family history.

One was about her great-great-great... grandfather. I haven't been able to find much evidence to support her ancestry, but the story of this particular grandfather is scary and fascinating.

First, I didn't know the word "lynch" had different etymology rooted in Ireland than it does in the States. The Irish etymology predates the American through the Stokers' grandfather, James Lynch Fitzstephen, also sometimes called James Fitzstephen Lynch.

Lynch was the infamous cold-hearted mayor/judge of Galway Ireland. The story goes that Lynch's son Walter was jealous of his father's Spanish houseguest, whom he believed was wooing his lady. In a fit of rage, he killed the Spaniard, but sobered up and confessed his crime. The people of Galway, for some reason, were on Walter's side and pleaded mercy on his behalf, but his ruthless father found him guilty and hung him out the window of their home. The house is gone, but the window is still there, marked with a plaque. 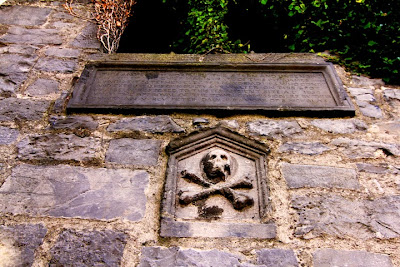 This memorial of the stern and unbending justice of the chief magistrate of this city, James Lynch Fitzstephen, elected mayor in A.D. 1493, who condemned and executed his own guilty son, Walter, on this spot.’ He was one son who was not spared.

As gruesome a story as this is, especially for telling a sick little boy, I did find a compelling argument for why the American etymology is more popular. Lynching is something that takes place outside of the law, whereas the mayor of Galway acted within the law. Earliest published use of the term dates back to 1811, well after Charles Lynch added his name to the list of terrible Lynches associated with the word, but, as if to accommodate differences of opinion on its etymology, the OED specifies that in its early use the word implied only "the infliction of punishment, such as whipping" etc.

I have to stop there because the history of the word is so awful that it makes me sick and I lose sleep. Other stories Mother Stoker used to tell were about deaths through the Potato Famine (1845-52). It's possible that she told these stories from her own memory. Punch comics sure had some things to say on the subject. 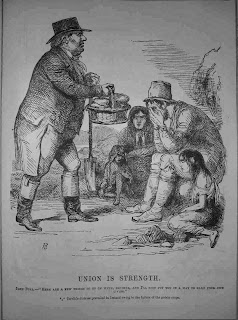 If Mother Stoker didn't make her son an author of horror stories with those tales, she also had Manus the Magnificent to talk about. Manus O'Donnell (d.1564) was an Irish clan leader and important member of the O'Donnell dynasty based in County Donegal. His father, Hugh, was crowned king of the O'Donnells during their clan's terrible feud with the O'Neills. Just reading his wikipedia entry is like watching the Game of Thrones.

Stoker fans everywhere look for traces of the Tales of Mother Stoker in Bram Stoker's Dracula. I can certainly see that when I think of Dracula talking about history after reading about Manus the Magnificent. The Mayor of Galway also posed a good model for a villain and might have made Stoker more sympathetic, when reading about Vlad the Impaler. But Stoker read about Vlad as an adult, so he must have loved listening to the terrible stories his mother told him as a boy.

A few days after I originally posted this, pieces of the stories that I imagine Mother Stoker telling her son start turning up in all of Bram Stoker's writing for me. Most shocking are the final words of Stoker's best known short story, "The Judge's House." My focus is overwhelmingly on the 1890s and Dracula, so as obvious as the connection is between the Mayor of Galway and "The Judge's House," I overlooked it until now. The story ends with the line:

There at the end of the rope of the great alarm bell hung the body of the student, and on the face of the Judge in the picture was a malignant smile.