Throwing Rotten Food in the Theatre 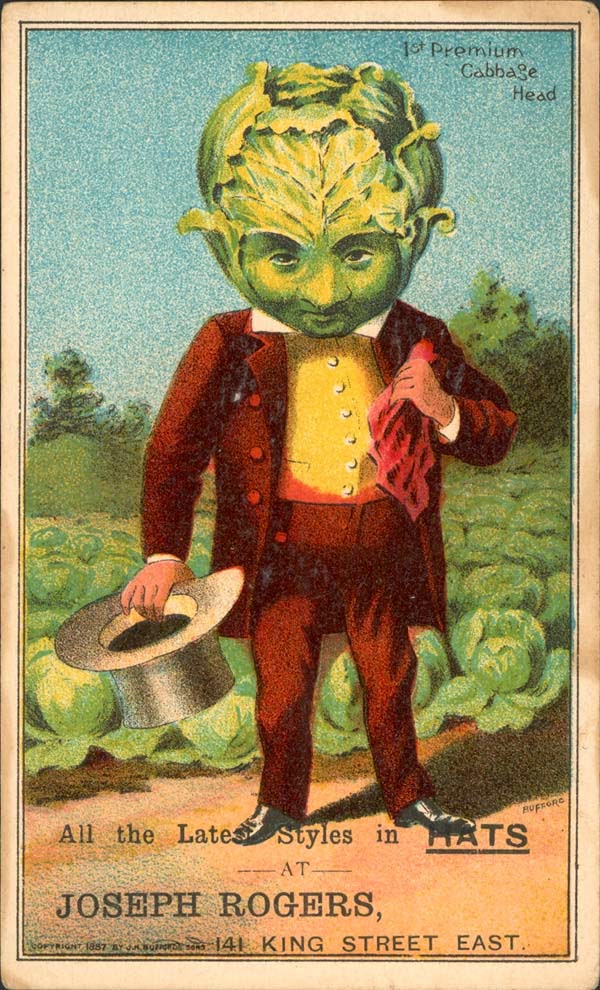 An interesting article about Oscar Wilde's cabbage got me thinking about writers and vegetables today, partially because I find it particularly disturbing when it takes a long time for a vegetable to go bad. (One of our neighbours left a real pumpkin in the basement last October. It's still there and shows no signs of decay. I also have a six-week green pepper in my fridge that seems perfectly fine.) The article is about Queensberry's bouquet of vegetables.

Act out in spite and you shall forever be remembered for your spitefulness. I find it hard to imagine that throwing rotten vegetables was ever really a thing, though it's a common motif in popular culture.

Bram Stoker shares this funny story about a politician's belief in their own popularity:


"I am growing popular!"
"Popular!" said his friend.
"Why, last night I saw them pelt you with rotten eggs!"
"Yes!" he replied with gratification, "that is right! But they used to throw bricks!"

The tradition of throwing rotten food dates back to medieval times, when it was customary to pelt petty criminals with rotten eggs, fruit, and vegetables. The first recorded instance of food being thrown as a form of protest took place in 63 AD; Vespasian was pelted with turnips by people who were angry over food shortages.

Rotten eggs soon became and seem to remain the most popular protest food. They are easy to carry and make a big smelly mess. As in the story about Wilde, vegetables are more popular in the theatre, though I don't know who brings rotten vegetables into a theatre, other than the spiteful Marquess of Queensberry.

The first actor recorded as being pelted with a tomato was John Ritchie in 1883 New York. The headline in the New York Times read: "An Actor Demoralized by Tomatoes." The New York Times article reads:


He had a crowded house, and was warmly received, in fact, it was altogether hot for him, there being distributed among the audience a bushel or two of rotten tomatoes. The first act opened with Mr. Ritchie trying to turn a somersault. He probably would have succeeded had not a great many tomatoes struck him, throwing him off his balance and demoralizing him… a large tomato thrown from the gallery struck him square between the eyes, and he fell to the stage floor just as several bad eggs dropped upon his head. Then the tomatoes flew thick and fast, and Ritchie fled for the stage door.

This was twelve years before Wilde's cabbage. With websites, like Rotten Tomatoes, and commercials that depict Justin Bieber being pelted with eggs, it doesn't seem like protest food will be coming to an end anytime soon. I just don't understand how so many people revel in their dislike of things. I'd rather just surround myself with fresh food and things I do like.

If you have enjoyed the work that I do, please support my Victorian Dictionary Project!
Posted by Tine Hreno at 9:18 AM