"...the consciousness of the mummy does not rest but is to be reckoned with." - Bram Stoker 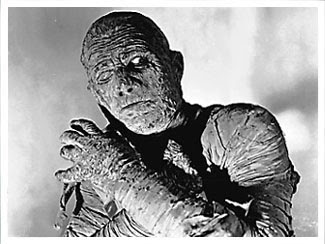 Why are mummies so scary? They don't moan and walk around in real life, the way they do in movies, but they are actual things. Mummies are the realest of all the horror movie monsters. Vampires and werewolves come from literature; trolls and ghosts from myths and folklore; but mummies actually exist. Fear of mummies is a projection of European guilt over the colonial project and embodies aspects of that project by making magical monsters out of the colonial other.

Europeans weren't the first to plunder the Great Pyramids, but late-Victorian London is the focus of this blog, so I'm not going to get side-tracked by other plunderers, especially when the influence of writers from 1890s London has such a profound influence on the development of the monster mummy narrative.

The belief that some of the antiquities were cursed had been circulating around Europe since the end of the 17th century, but that didn't stop "collectors," like Lady Meux and Sir William Wilde. Sir William, Oscar Wilde's father, collects Egyptian antiquities that he took directly from Egypt. Bram Stoker later recalled listening to Sir William's stories about Egypt "before all the archeology started." Lady Meux developed one of the largest collections with over 2,000 pieces, including mummies, which she tried to donate to the British Museum upon her death.

This was the social/political climate in which Bram Stoker wrote the first prominent work of fiction featuring mummies as supernatural antagonists: The Jewel of Seven Stars (1903). Like Stoker's vampires, his mummies became postcolonial pop-culture icons. Before the Jewel was published, mummies' curses were used to explain the deaths of anyone connected to anyone who came into contact with a mummy. After the Jewel was published, the mummies themselves could be reanimated.


"Father, in the Egyptian belief, was the power of resurrection of a mummied body a general one, or was it limited? That is: could it achieve resurrection many times in the course of ages; or only once, and that one final?"

"There was but one resurrection," he answered. "There were some who believed that this was to be a definite resurrection of the body into the real world. But in the common belief, the Spirit found joy in the Elysian Fields, where there was plenty of food and no fear of famine. Where there was moisture and deep-rooted reeds, and all the joys that are to be expected by the people of an arid land and burning clime."

Then Margaret spoke with an earnestness which showed the conviction of her inmost soul:

"To me, then, it is given to understand what was the dream of this great and far-thinking and high-souled lady of old; the dream that held her soul in patient waiting for its realisation through the passing of all those tens of centuries. The dream of a love that might be; a love that she felt she might, even under new conditions, herself evoke. The love that is the dream of every woman's life; of the Old and of the New; Pagan or Christian; under whatever sun; in whatever rank or calling; however may have been the joy or pain of her life in other ways. Oh! I know it! I know it! I am a woman, and I know a woman's heart. [...]" - Bram Stoker, The Jewel of Seven Stars (1903)

The idea of a mummified Egyptian queen, not dead, but asleep and dreaming of love, was transferred directly into an episode of Buffy the Vampire Slayer in 1997, in which the 500 year-old mummy of an Inca princess is brought back to life and falls in love with Zander.

Conscious willing desire is what separates pop-culture supernatural antagonistic mummies from their zombie counter parts. Zombies mindlessly wander about seeking brains, but if a mummy feeds on a human it is for strength to carry on a new life, or to maintain guardianship over their afterlife. For Stoker's mummy, it was both. In this scene of the Jewel, Stoker's protagonists are trying to interpret "ka" and "ab" from an Egyptian text:


"It means that for this night the Queen's Double, which is otherwise free, will remain in her heart, which is mortal and cannot leave its prison-place in the mummy-shrouding. It means that when the sun has dropped into the sea, Queen Tera will cease to exist as a conscious power, till sunrise; unless the Great Experiment can recall her to waking life. It means that there will be nothing whatever for you or others to fear from her in such way as we have all cause to remember. Whatever change may come from the working of the Great Experiment, there can come none from the poor, helpless, dead woman who has waited all those centuries for this night; who has given up to the coming hour all the freedom of eternity, won in the old way, in hope of a new life in a new world such as she longed for...!"

George Washington used the term "the Great Experiment" to refer to the United States of America and Stoker was a scholar of American history, so it's not a stretch to say that "the Great Experiment," in this case, refers to modernity. If the experiment is a success the modern world will be everything that the mummy ever dreamed of, and by extension the right place for all other cursed Egyptian antiquities. 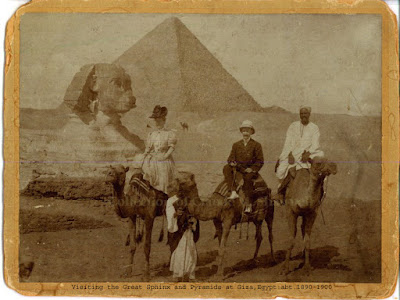 The notion that preserving antiquities is the burden of the benefactors of societies great experiments is at the heart of the cursed artefact myth and permeates the views of many modern Egyptologists and museum patrons. In the words of Jasmine Day in "The Mummy's Curse: Mummymania in the English-speaking World" (2006):


Popular archeology's promise of empowerment to its audiences can thus become implicated in a regressive imperialistic fantasy. The 'Humanity Ownership Argument' frequently invoked in debates about control of cultural property, holds that a body of material culture should not be possessed solely by a single ethnic group. This resembles the demand of the Dragon Principle that valuables be ceded to those who can best utilize them. [Some people] believed that indigenous peoples' requests for reparation of their former possessions threatens archeology. They spoke as if their own property were being threatened, because they identified with the archeologists.

Bram Stoker might not have invented the mummy, but he animated it and infused its new life with the anxieties of the emerging postcolonial era, the traces of which can still be seen today.

If you have enjoyed the work that I do, please support my Victorian Dictionary Project!
Posted by Tine Hreno at 6:37 AM