Some Old Ideas About Birth Control 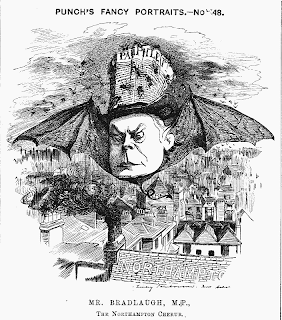 Today, I'm looking at two writers. I don't suspect they were ever in love, but they did work togather to produce one of the more interesting reads on birth control methods that I've seen from the decade. I'm speaking, of course, about Charles Bradlaugh and Annie Besant's Fruits of Philosophy, A Treatise of the Population Question (1832).

Annie Besant was a socialist, women's rights activist, writer, and public speaker. While the Fruits of Philosophy was being written and/or published, she was developing a close friendship with the religious scholar, Helena Blavatsky. The two were very interested in Theosophy. Charles Bradlaugh, on the other hand, was a famous atheist.

Though I'm still not certain what compelled the pair to work together on the Fruits of Philosophy, the following passages provide a lot of insight into how Victorians were making love.


There have been several means proposed and practiced for checking conception. I shall briefly notice them, though a knowledge of the best is what most concerns us. That of withdrawal immediately before emission is certainly effectual, if practiced with sufficient care. But if (as I believe) Dr. Dewees’ theory of conception be correct, and as Spallanzani’s experiments show that only a trifle of semen, even largely diluted with water, may impregnate by being injected into the vagina, it is clear that nothing short of entire withdrawl is to be depended upon. But the old notion that the semen must enter the uterus to cause conception, has led many to believe that a partial withdrawal is sufficient, and it is on this account that this error has proved mischievous, as all important errors generally do.

First, I love the use of the word mischievous there. Second, I'm pointing out that even 122 years ago they didn't even believe that the body could repress conception, the way that some American Republicans do today!

It is said by those who speak from experience that the practice of withdrawal has an effect upon the health similar to intemperance in eating. As the subsequent exhaustion is probably mainly owing to the shock the nervous system sustains in the act of coition, this opinion may be correct. 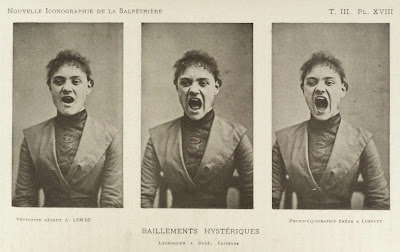 Another check which the old idea of conception has led some to recommend with considerable confidence, consists in introducing into the vagina, previous to connection, a very delicate piece of sponge, moistened with water, to be immediately afterward withdrawn by means of a very narrow ribbon attached to it. But, as our views would lead us to expect, this check has not proved a sure preventive. As there are many little ridges or folds in the vagina, we cannot suppose the withdrawal of the sponge would dislodge all the semen in every instance. If, however, it were well moistened with some liquid which acted chemically upon the semen, it would be pretty likely to destroy the fecundating property of what might remain.

Even though it's a terrible form of birth control, I love that they were using it in Victorian England. Women needed something other than that reusable condom that was available to some Victorian men. I've also read that sponges dipped in brandy were used in seventeenth-century France. The Fruits of Philosophy goes on at great length about different kinds of concoctions the authors think will act as safe spermicides, but I don't imagine that those mixtures were any safer than sticking a sponge covered in brandy up there.

It consists in syringing the vagina immediately after connection with a solution of sulphate of zinc, of alum, pearl-ash, or any salt that acts chemically on the semen, and at the same time produces no unfavorable effect on the female.

In all probability a vegetable astringent would answer— as an infusion of white oak bark, of red rose leaves, of nutgalls, and the like. A lump of either of the above-mentioned salts, of the size of a chestnut, may be dissolved in a pint of water, making the solution weaker or stronger, as it may be borne without any irritation of the parts to which it is applied. These solutions will not lose their virtues by age.

I know the use of this check requires the woman to leave her bed for a few moments, but this is its only objection...

It's certainly not the only objection! Like I tried to say before, that just sounds disgusting! What I do like, however, is that the Fruits of Philosophy promote their methods as affordable; it's good that was important to them, even if it was because they had their minds set on stopping poor people from reproducing. 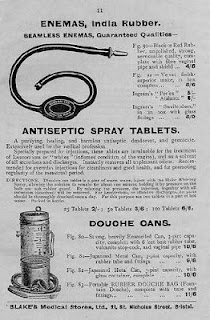 More positively, as Slip Into Something Victorian observes:

Douching had several benefits. First, of all it was legal through the entire period. While the Comstock laws made pretty much anything related to reproduction “obscene” and could therefore not be transported through the mail, douching was considered by most doctors as an important part of women’s health. Secondly, the more acceptable method of method of birth control, withdrawal, depended upon the male and his willingness to practice it, whereas douching put the control in the hands of the wife, who, after all, paid the most for the outcome.

As Bradlaugh and Besant go on, it seems that douching after sex was the most popular way of preventing pregnancy for the woman. I've certainly seen that to be true through literary evidence from the beginning of the twentieth century.

Thank you to Susan Ives for finding this!