The First Romantic Movie Ever Made

Movies were a brand new thing in the 1890s. Originally, movies weren't very long. The first romantic movie ever made was an 18-second sensation called: "The May Irwin Kiss." It became the most popular film of the year and became the first in a long line of romantic cinema. 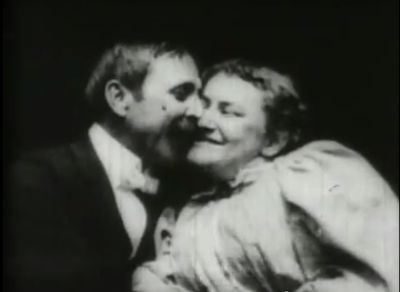 As Yet Another Movie Blog observes, the film itself is like a home movie because you are thrown into the scene without any information about the characters or the setting, but the assumption was that, if you went to the theatre to see this film, you already knew what it was and all of the background information, which was the climax from the play, The Widow Jones.

May Irwin is the actress in the film. She was Canadian and worked primarily in the United States, but this is a blog about Writers in London in the 1890s, so I've done a little extra work to link her to our literary stars.

According to the notes on the May Irwin Collection at the Whitby archives,


In 1883, Irwin acted with Augustin Daly’s company and spent several seasons at Toole’s Theatre in London, England. She returned to New York for the 1891-92 season and in 1893 she played Ophelia in a burlesque production of Oscar Wilde’s Lady Windemere’s Fan.

I would love to see a burlesque production of Lady Windemere's Fan, even today!