I've been feeling very visual in my writing lately. I also edit as I write. Sometimes, editing can be heartbreaking, so I'm sharing a passage that I just removed from my book.


Upstairs halls tell you more about a family than all of their downstairs rooms combined. Downstairs rooms are for showing off. Upstairs halls reveal the way that people live, the things they leave on the floor, the bedroom doors they leave open and shut. Truly, upstairs halls are more revealing than bedrooms. The floor in the Stokers’ upstairs hall was spotless, which is a sign of a depressed housekeeper or housewife. Elevated, Noel’s nursery was on the third floor. Mr. Stoker’s bedroom door was closed, as was Florrie's, but this she opened, allowing me inside.

I replaced that passage with "Florrie opened her bedroom door."

Honestly, I don't know what the Stoker's house looked like inside. That was pure imagination. I've only seen pictures of the Stokers' houses on Google Street View. I do, however, have this information from the 1881 census:

1 inhabited house at this address

I think it's interesting that Mrs. Stoker's occupation appears as "artist." I know that she wanted to be an actress and appeared in at least one play, but I haven't seen anything about her being any other kind of artist. At that address, they lived a block from Dante Gabrielle Rossetti, overlooking the Thames. 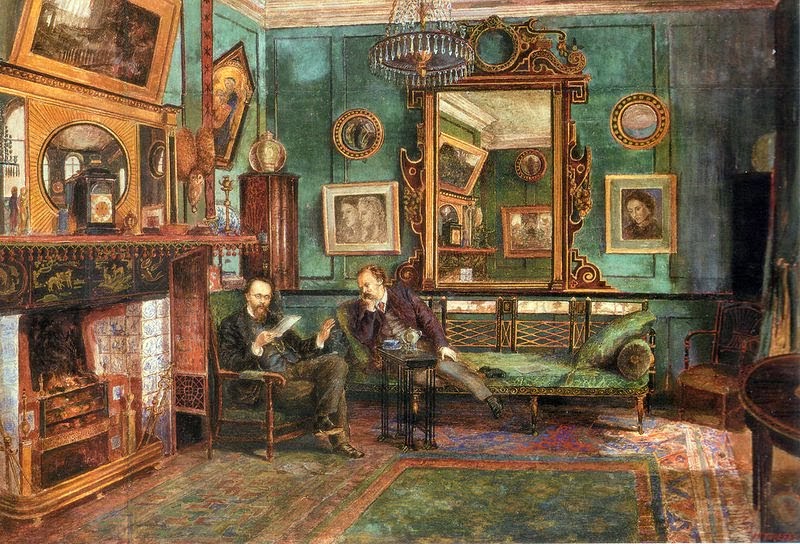 By 1891, the Stoker family lived at 18 St Leonards Terrace. Bram's brother George still lived with them, but they had new servants, Ada Howard and Mary Drinkwater.

On St Leonards Terrace, the Stokers would entertain people, like Mark Twain, who remembered Mrs. Stoker fondly in one of his letters. I'm looking for photos and more information about both houses. Any help is appreciated and I will share what I learn.

April 10, 2014: To this, I would like to add that The Lost Journal of Bram Stoker lists Dr. George Stoker at 14 Hertford St, London with his wife Agnes, two children, a cook, a parlour maid, a housemaid, and a 24 year-old governess called Minna. That sounds like information the editors gathered from the census, which completely contradicts what I thought I read in the census. If anyone can double check the 1891 census, I would love to hear from you, as I no longer trust my memory on this point and The Lost Journal doesn't record a source for this information.