The Victorian sensation novel is evidence that Victorians loved intrigue as much as we do, with all of our murder-mystery television series. The 1890s saw the birth of the forensic sciences at the root of those shows, through the media sensationalism around Jack the Ripper and the popularity of genius detective, Sherlock Holmes.

Jack the Ripper and Sherlock Holmes encouraged widespread mistrust of the police and made many people want to take matters into their own hands by becoming private detectives. As you might have seen in my post on the weirdest cameras of the 1890s, the evolution of photography was ready to appeal to their meddling needs.

Many ads were innocent enough, but others deliberately encouraged customers to spy on people. Marion’s Parcel Camera advertised that: 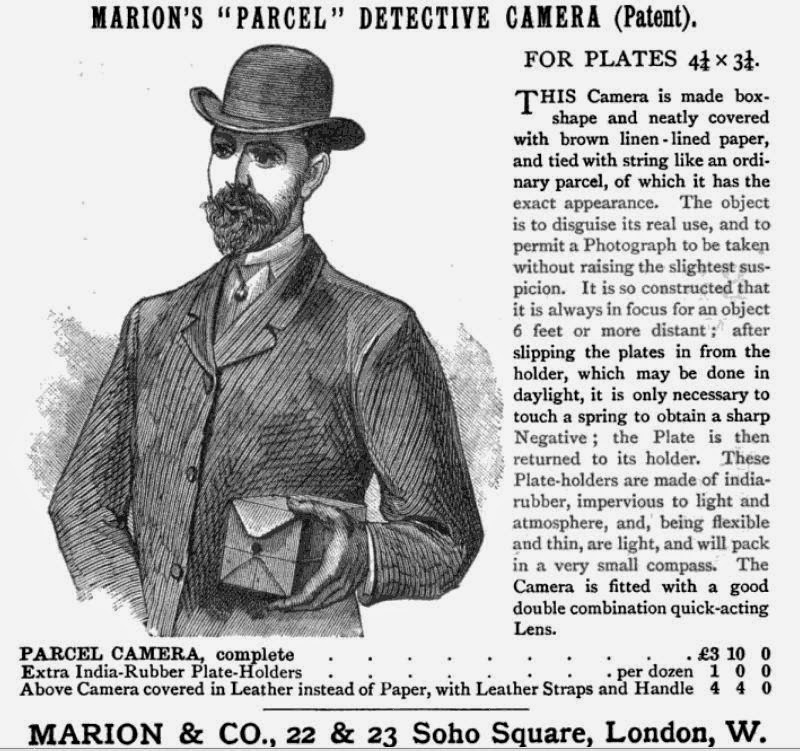 This Camera is made box-shaped and neatly covered with brown linen-lined paper, and tied with string like an ordinary parcel, of which it has the exact appearance. The object is to disguise its real use, and to permit a Photograph to be taken without raising the slightest suspicion.

Anthony's Patent Satchel Detective Camera illustrates how these devices worked and were evolving. 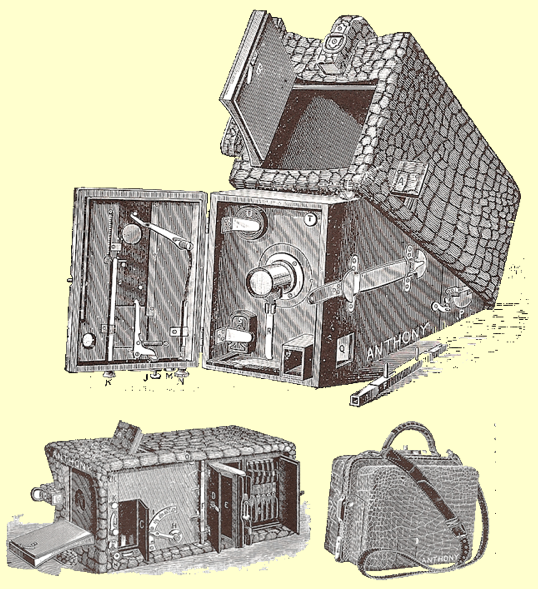 Photographs weren’t used in Oscar Wilde’s trial, but the years that followed would see a rise in photos taken with the intent of incriminating participants in seemingly private acts. 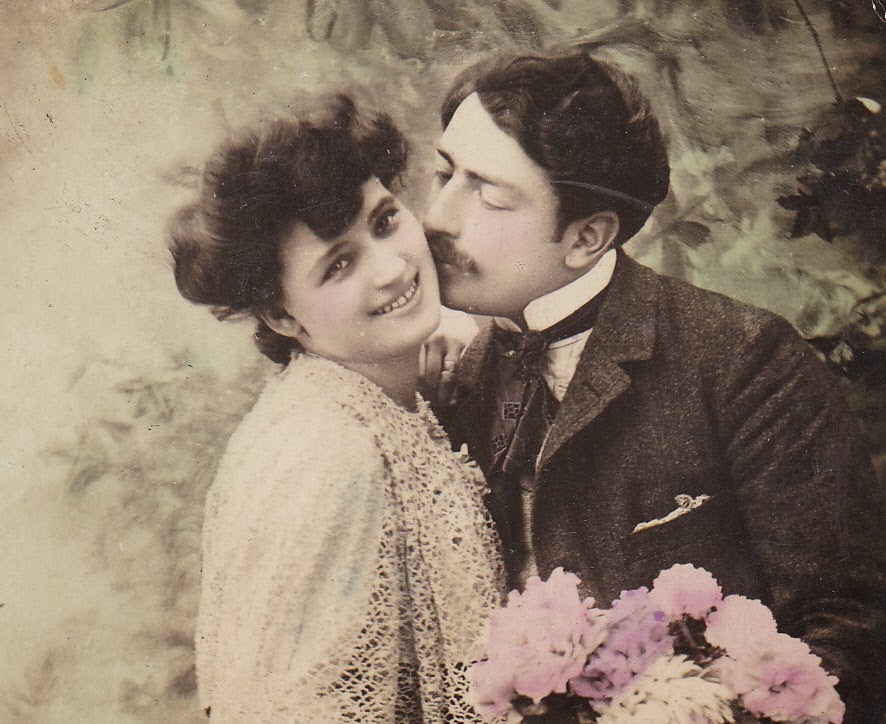 In 1920, a twenty-year-old actress, called May Levy, was used as bait to ensnare John Blake in a blackmail scheme. Blake recalled hearing a suspicious click in her bedroom, which turned out to be the noise from a camera taking a picture.

In another instance, where no photos were used, a young man name John Richardson propositioned another young man in 1887. Richardson blackmailed his victim by threatening to charge him with assault and followed him to the shop, where he pawned his watch in payment. Both youths were sentenced to ten years.

I can’t be sure how prevalent photographic blackmail was in the 1890s. Court records are difficult for me to access and many cases would have never made it to court for obvious reasons. Between the Labouchere Amendment and spy-camera technology, homosexuals would have been particularly vulnerable. Historian, Angus McLauren, who I once had the honour of taking a course with, summarizes the complex roles of blackmailers and their homosexual victims in fin de siécle London and New York.


Homosexual blackmail trials performed a variety of functions. They were used by the defenders of bourgeois respectability to depict the horrific fate of both the extortionist and the man who had been so incautious as to fall into his snare. In fin de siécle London and New York judges told men as well as women that they had to be wary of strangers, in particular young men. The press reported miscreants who threatened to charge men with “infamous crimes” and the courts dealt openly with accusations of sodomy, yet in generally asserting that the extortioners’ threat was not only illegal but untrue, judges sought to make it known that they had no intention of protecting perverts. The courts and the press careful tried to avoid using blackmail cases to explicitly discuss same-sex passions, while they implicitly warned the adventurous of the dangers of giving way to temptation. Interestingly enough, the court and press reports did not suggest that dangerous youths would necessarily appear effeminate; the stereotyped “homosexual” had not yet fully emerged. Yet because the accused included male prostitutes, the trials no doubt confirmed the popular notion of the homosexual as villainous blackmailer.

If you weren’t inside the circle of targeted victims, as Wilde was, an 1890s onlooker couldn’t have possibly understood the dangers and vulnerability of the love that dare not speak its name, when looking at an ad for a Demon Camera. 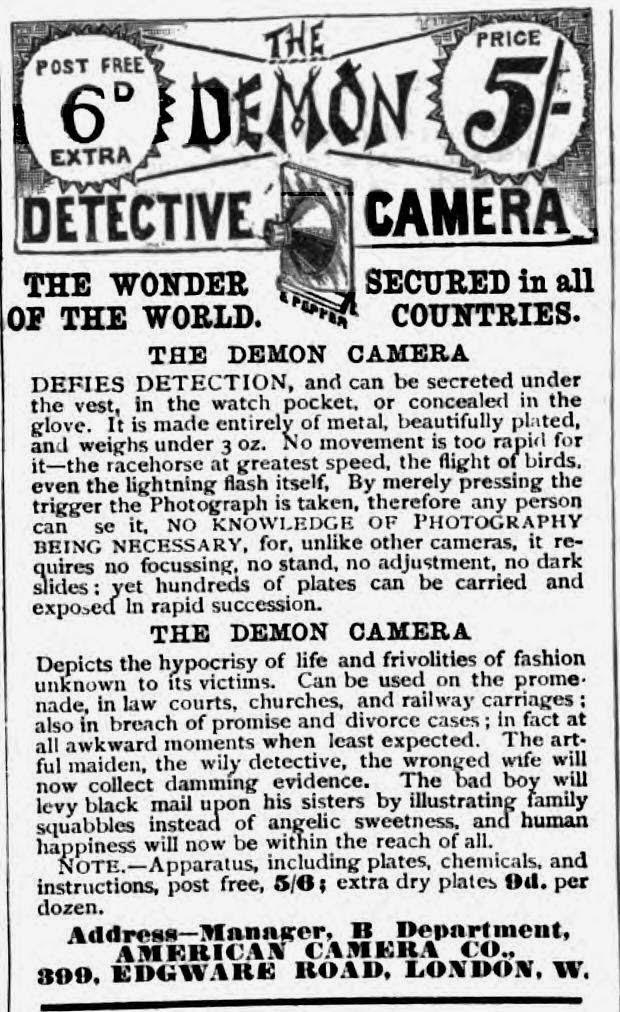