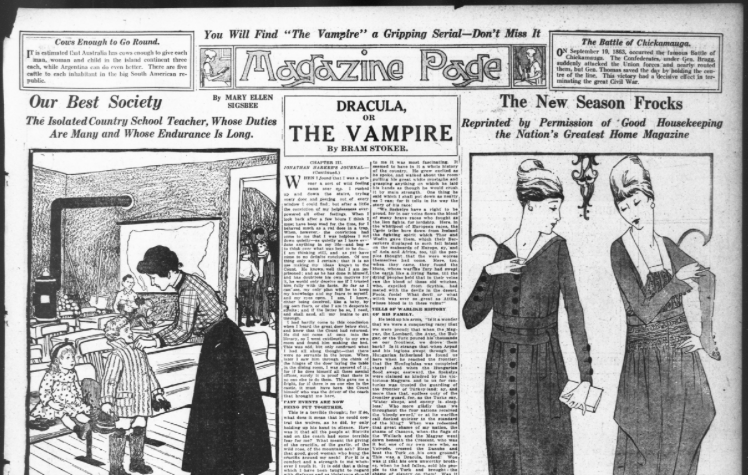 Something about finding Dracula serialized in the Washington Times five years after Bram Stoker died struck me. In 1917, it still looks very Victorian and domestic with the images around it.

Although Dracula wasn't as successful and Stoker would have liked, during his life, Florence Stoker (born: Florence Anne Lemon Balcombe - I love the name "Lemon") protected its copyright viciously and benefited from a good income, long after her husband's death. Indeed, she is best remembered for suppressing Friedrich Wilhelm Murnau's film Nosferatu (1922), which was based on her husband's novel.

Screenwriter, Henrik Galeen changed the main character's names and some certain key points, but the resemblance to Stoker's novel was still undeniable. As Stoker's literary executor, Florence never gave permission for the adaptation, or received payment for it. She was furious and demanded the financial reparation that was due to the estate. She also wanted all of the negatives and prints of the film  destroyed.

Despite her success in court, Nosferatu survived and slowly began to resurface in the late 1920s, with the first American screenings taking place in New York City and Detroit in 1929.

Surely she got payment for the novel's serialization in the Washington Times.