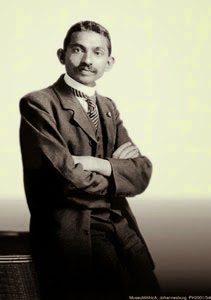 Grouse or partridge, pheasant, duck, woodcock or snipe; quails from Egypt, fattened in Europe; oysters, swallowed between mouthfuls of bread and butter; Scotch broth; and turtle soup, that is how I generally imagine a "proper" Victorian table. Although decadent, these types of tables were considered unenlightened by a growing number of the English middle- and upper-class, who were adopting vegetarianism. Sadly, Victorian vegetarians consumed some rather dull fare. That would, however, begin to change, as Mahatma Gandhi was in London writing prolifically on the subject of food.

Gandhi arrived in London on 4 September 1888 to begin law school at University College. Though he avoided eating meat and drinking alcohol throughout his life, he didn't join the London Vegetarian Society until 1890-91. Once he did join, he wrote at least twelve articles on vegetarianism for the organization's journal, "The Vegetarian," between 7 February 1891 and 16 April 1892. He didn't stop writing for the Vegetarian after April 1892, but his articles were less frequent, and his next one bore the title: "English Misrule in India."

Gandhi begins with a five-part series: "Indian Vegetarians." The first part outlines reasons behind Indian vegetarianism, including religion, caste, and poverty. Next, Gandhi focuses on the two main daily meals, explaining them for his English readers. In part three, Gandhi really begins to extol the superiority of India's diet over the English. Indian flour, Gandhi explains, "is far superior to the ordinary flour that is used here for the much abused white bread." His concluding paragraph, re the English influence on Indian beverages, includes words that would have greatly appealed to the significance of the English teetotaler's cause.


The most that tea and coffee can do is to cause a little extra expense, and general debility of health when indulged to excess, but one of the most greatly felt evils of the British Rule is the importation of alcohol - that enemy of mankind, the curse of civilization - in some form or another. The measure of the evil wrought by this borrowed habit will be properly guaged by the reader when he is told that the enemy has spread throughout the length and breadth of India, in spite of religious prohibition ; for even the touch of a bottle containing alcohol pollutes the Mahomedan, according to his religion, and the religion of the Hindu strictly prohibits the use of alcohol in any form whatever, and yet alas! the Government it seems, instead of stopping, are aiding and abetting the spread of alcohol.

In part four, Gandhi sets out to destroy the myth that vegetarians are weaker than omnivores. To further the point, in part five, Gandhi describes the life of an Indian shepherd, which is "in many respects, is an ideal mode of life. He is perforce regular in his habits, is out of doors during the greater part of his time, while out he breathes the purest air, has his due amount of exercise, has good nourishing food and last but not least, is free from many cares which are frequently productive of weak constitutions." 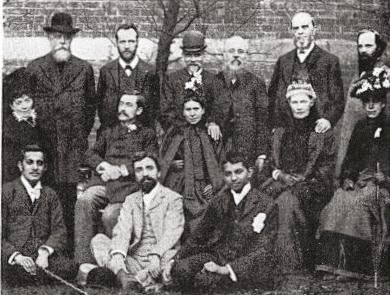 Over the next few months, Gandhi writes to educate English vegetarians about Indian vegetarian life. At the time Gandhi was writing, vegetarianism was still in its infancy in London. The Vegetarian Society's was only just founded in 1847. Victorian vegetarians made the break from traditional cuisine for various reasons, such as varied as self-improvement, expense, health concerns, and genuine concerns about animal cruelty. When Gandhi wrote about the foods of India, he was likely expanding the diets of many vegetarian Victorian Londoners.

Typically, vegetarians in London in the 1890s were eating lentil or other bean soups, bread-crumb omelets, boiled onions in butter (seasoned with nutmeg, pepper, and salt), and potatoes made several ways. The things Gandhi could teach them about spices alone must have led to so much invention.

Until 1903, Gandhi continued to publish articles from abroad with the Vegetarian Society, though his writing would take an important turn. Come back for more on that soon!