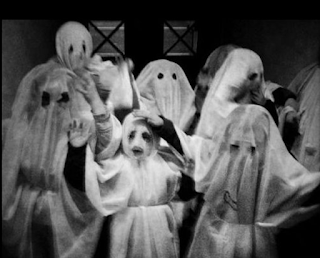 Founded in London in 1862, the Ghost Club is the oldest paranormal investigation and research organization in the world. The organization is still active today and its members have included: Charles Dickens, Sir Arthur Conan Doyle, W.B. Yeats, and Siegfried Sassoon.

The Ghost Club was seven years in the making, having started as a conversation about ghosts between Cambridge fellows at Trinity college in 1855. Naturally, it attracted some banter in the Times, but with Charles Dickens and some Cambridge men among their ranks, the Ghost Club soldiered on.

Like real-life Victorian Ghostbusters -- though maybe they were more like Myth Busters, the Ghost Club investigated spiritual phenomena, like the Davenport Brother's spirit cabinet. The Davenport Brothers were travelling American magicians and the spirit box was their most famous illusion. In the spirit box illusion, the brothers were tied inside the box with some musical instruments. When the box was closed, the instruments played, but when it was opened, the brothers remained tied in their original positions. The Ghost Club never published the result of their investigation.

Following Dickens' death, the Ghost Club became inactive during the 1870s, but was revived on All Saints Day 1882. It remained a select and private organization of earnest ghost hunters, who really believed that ghosts existed. They met monthly and women were not admitted.

Investigations into the spirit world were referred to as 'physical research,' and the growing popularity of Spiritualism at this time attracted people like Sir Arthur Conan Doyle and Sigmund Freud to its meetings. Many members treated Ghost Club as a kind of refuge, where they were able to conduct the kind of research and have the kind of conversations that they were unable to have elsewhere.

At each meeting of the Ghost Club a list of all the members, dead or alive, was read. Deceased members were said to sometimes make their presence felt during this activity.

Sir Arthur Grey of Jesus College, Cambridge, immortalized the Ghost Club as "The Everlasting Club" in 1919 - a ghost story that, around Cambridge, some still believe to be true.
Posted by Tine Hreno at 11:45 AM