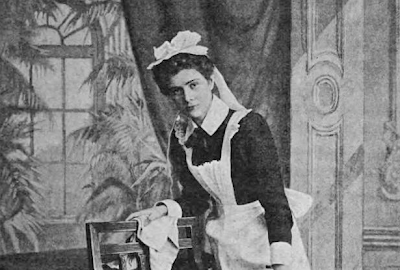 Elizabeth Banks disguised as a housemaid

Elizabeth Banks was an American journalist, who moved to London in 1892, and became a pioneer in the field of immersion journalism for women.

Immersion (also called “stunt”) journalists, in the Victorian Era, immersed themselves in the story they were investigating, by, for example, admitting themselves to lunatic asylums to expose systemic abuses. These were the journalists of the 1890s, who went slumming in Whitechapel with a spy camera.

Banks grew famous for a series of articles called “Campaigns of Curiosity: Journalistic Adventures of an American Girl in London” (1894), which related her experiences disguised as a parlourmaid, flower girl, laundress, crossing sweep... well, you get the idea. She was primarily interested in servants’ rights and responsibility, as well as women’s reluctance to enter into service, also known as “The Servant Question.”

By way of training, Banks read “Duties of Servants: A Practical Guide to the Routine of Domestic Service by A Member of the Aristocracy” (1890) and placed an ad for herself in the Daily Telegraph. Disguised as a servant, Banks called herself “Elizabeth Barrows” and found work in two London homes.

The Weekly Sun serialized her findings as “In Cap and Apron: Two Weeks in Service” between 22 October and 10 December 1893. There were reprinted in Banks’ Campaigns of Curiosity.

Banks’ “stunt” sparked controversy and the Weekly Sun published letters from both sides of the debate. Many people felt that Banks had betrayed her employers confidence. One letter identified Banks as an American from her use of the terms “pitchers” and “washbowls,” which eventually forced Banks to admit that she was in fact motivated by economic need. But, hey! Good work is good work, whether or not you need the money.