One of the craziest Wildes I've found in my research was the one-time wife of Oscar Wilde's brother, who never used the name Wilde. The name that this American publisher enjoyed the longest was Mrs. Frank Leslie, but, rather than dwelling on her names, I'd like to record what I've learned about her Wilde life. 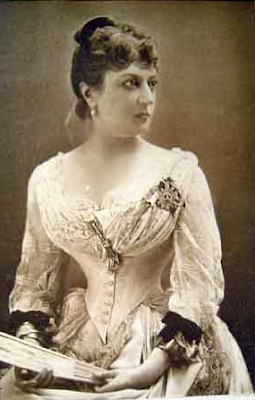 In 1836, Leslie was born Miriam Florence Folline to a noble Huguenot family in New Orleans, Louisiana. Although rumoured to be the product of an affair her father had with a slave, she was raised by her father’s wife, who Leslie knew as her mother. She studied French, German, Latin and Spanish as a child and was provided all of the advantages that her family's dwindling fortune would allow. Yet, Leslie claimed: "I never had any childhood, for the word means sunshine and freedom from care. I had a starved and pinched little childhood, as far as love and merriment go." Her father, personally, supervised her early education, until his financial situation collapsed, in 1846.

Due to her father's financial situation, the family moved to Cincinnati, where her father spent far less time with her, then to New York, around 1950. In New York, her mother ran a boarding house, while striving to keep up appearances, so that her daughter might marry well. I imagine Leslie got her strength and good business sense from her mother, at this time in her life. However, she also got a determination to marry and marry well.

Leslie married, for the first time, at just seventeen. Her first husband, David Charles Peacock was a jeweller. They spent less than a year together as man and wife, in 1854. Ten years Leslie's senior, Leslie's mother forced Peacock to marry Leslie under the threat of arrest for seduction. Peacock landed in an insane asylum, where he eventually died. Their marriage was annulled in 1856 and Leslie's reputation in tact. 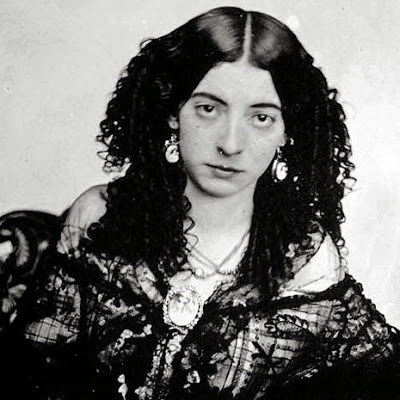 After her marriage to Peacock, in the mid-1850s, Leslie began life as an actress, under the name of Minnie Montez, stage sister to Lola Montez, a charming and legendary adventurer. The story goes like this: while entertaining in the mining settlement of Grass Valley, Califoria, Montez met Leslie’s half-brother Noel Follin, who kept Leslie apprised of his own adventures by post; Follin accompanied Montez on a theatrical tour to Austrailia, but was tragically thrown overboard during the trip; devastated, Montez travelled to New York to offer her services to his family and wound up taking Leslie under her wing. 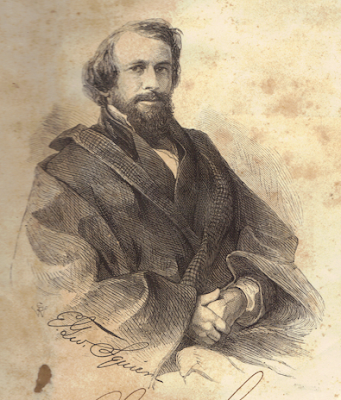 By 1857, Leslie abandoned her acting career to marry the archeologist and newspaper editor, Ephraim Squier. Leslie married Squier in 1858. Within a couple of years, Squier was promoted to editor-in-chief of Frank Leslie's publishing house, where he supervised the publication of Frank Leslie's Pictorial History of the American Civil War; vol. 1 & 2. I’m sure you can see where this is going.

In 1863, the editor of Frank Leslie’s Lady’s Magazine fell ill and our Leslie volunteered to fill in. The original editor died in 1871 and Leslie got the job permanently. As biographer, Madeleine B. Stern, wrote:


To her various skills Miriam now added the arts of flowery prose writing and editorial acumen. From her editorial corner she watched the House of Leslie expand until it employed from three to four hundred assistants including seventy wood engravers and boasted an aggregate circulation of some half a million copies per week. 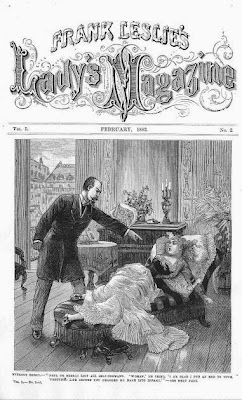 Clearly, lots of wives of editors, who worked for Mr. Frank Leslie, would have loved the job, but Mr. Leslie had been living in the Squier household since 1861. For some time, the relationship between all three became sexual, but eventually Squier appeared to be in the way of a great love that was blossoming between his wife and his boss. Stern writes:


It was inevitable that, after a sensational divorce from the now unbalanced E. G. Squier, she should acquire yet another name—Mrs. Frank Leslie. On July 13, 1874, the thirty-eight-year-old editor of a woman's magazine was married to the suave and elegant fifty-three-year-old magnate of Publishers' Row. One month later, E. G. Squier was committed to an asylum for the insane.

Under the name she liked longest, if not best, Leslie’s life becomes even more interesting. 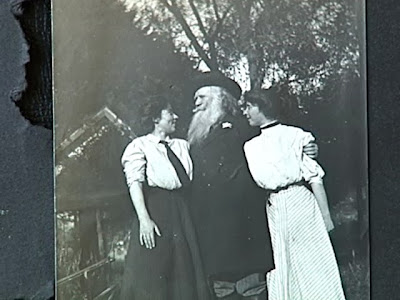 While the Leslies were on their honeymoon, they met Joaquin Miller, nicknamed the poet of the Sierras. The newlyweds soon began an affair with the poet and Mrs. Leslie became a character in Miller’s novel, The One Fair Woman. I imagine Mr. Leslie is featured in the book as well:


The beautiful lady smiled with an expression of sadness that was even painful, but only smiled. The husband, a handsome, graceful, Italian-looking fellow, with a small hand and a small weak nose, and a small head which was getting bald lifted his hat also, with that ease and composure which shows at least the gentleman bred and born. 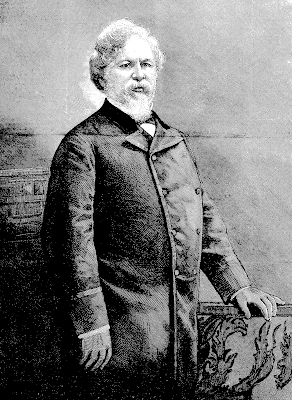 Even if Mr. Leslie was bred and born and a gentleman, due to the Panic of 1873, their lavish lifestyle, expensive trips, and probably due to the time those things took away from actual work, the Frank Leslie publishing empire was in financial trouble by 1877/8. By the time of Mr. Leslie’s death, in 1880, they were about $300,000 in debt. She reorganized everything, became president of the company and increased circulation of their most popular publication by over 200,000 copies in just four months.

This is when our Leslie takes over, she put the business on a paying basis, even legally changing her name to Frank Leslie in 1881. In the early 1880s, Leslie made most of her money in the newspaper aspect of her publishing empire, by capitalizing on President Garfield’s assassination in 1881. Garfield’s illness and death provided a national demand for news and Leslie provided it by issuing three illustrated newspapers per week. At the time, her rise from near financial ruin was unparalleled in journalism history, Hailed as the “Empress of Journalism” and a “commercial Joan of Arc,” Leslie became a real-life legendary figure on Publishers’ Row. 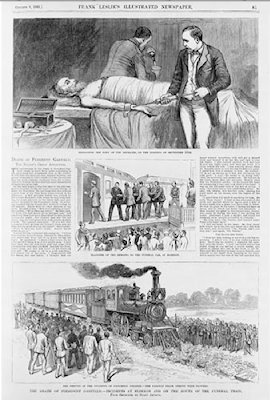 Her success afforded her a prominent place in New York society, a place that was so secure that, by the 1890s, she could even afford a run-in with the Wilde family. Followers of the Wilde family history, even followers of my blog, will be familiar with Oscar Wilde’s mother, Speranza, and her love of “interesting” people. Leslie was interesting enough for Speranza. She was also rich and Speranza still had an unmarried son. Speranza is said to have introduced the two with the words: “I’d like you to meet your future husband.” 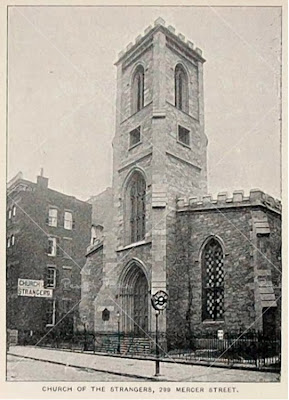 Leslie brought Willie Wilde back to New York and married him in 1891 at the Church of the Strangers. She had a strange year in store, for Willie was a raging alcoholic, who was jealous of his brother, and apparently couldn’t perform in bed, when Leslie wanted him to. Proclaiming that she had married “the wrong Wilde,” Leslie returned him to his mother in London. 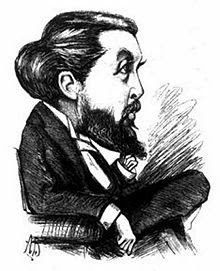 Willie Wilde survived the marriage, didn’t go in to an insane asylum, but turned Leslie off of marriage for the remainder of her years, although she did engage in a rather public flirtation with the Marquis Campo Allegre Villaverde, Court Chamberlain to King Alfonso of Spain.

Flirting with aristocrats, Leslie was a self-made multi-millionaire, who craved an aristocratic title, so she simply made one up: Frank Leslie, Baroness de Bazus. Instead of husbands or children, she coddled a Yorkshire Terrier and held salons, similar to those to her former mother-in-law, Spernaza. 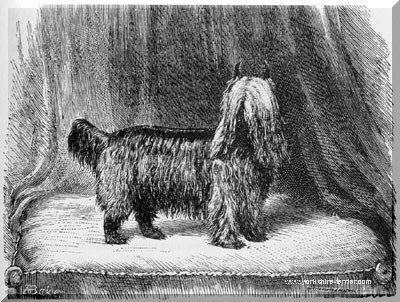 A woman, who led such an interesting life, had to have an interesting death and, unlike Willie, Leslie never disappoints. Leslie died in 1914, leaving the majority of her fortune to Mrs. Carrie Chapman Catt, to be used for the promotion of the cause of woman suffrage. Obviously, people claimed she was crazy. After all, she coddled a dog and made her own money... and I guess there was the whole Baroness de Bazus business.

Rose Young tells the story of what happened after 1914. Young’s tale:


records a curious tale of claims and contests with dubious foundation, which made huge inroads into the estate.

It shows how a fortune may be scaled down through depreciation, taxation, and enormous expenses, charged to administration. It shows the lengths to which claimants will go in attacking the reputation of the dead. It records the many suits, judgments and appeals involved in the settlement of the Leslie estate. It sets forth what the next of kin got, what the lawyers got, what the executors got, and, finally, what Mrs. Catt did with the portion that came to her. For suffragists it will serve as a recognition of their interest in the proper disposition of the fund left by Mrs. Leslie to further the suffrage cause, and as an official report of Mrs. Catt's stewardship of that fund.

For my part, I’m blown away by how Leslie lived before woman suffrage, whether she was crazy or not. Also, upon reviewing the images that I've gathered here, I have to say, she liked her men the way she liked her puppy... with lots of facial hair!