Why Writers Moved to London 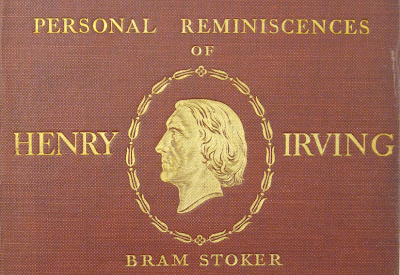 Bram Stoker’s Personal Reminiscences of Henry Irving (1906) is the closest thing we have to an autobiography of Stoker’s life. Moments, inside the text, reveal much about Stoker and, sometimes, appear to have nothing to do with Irving at all.

The tidbit, which I share with you today, is set in 1877, a year before Stoker married Florence Balcombe and almost two years before they moved to London, where Stoker would devote his life to the service of the actor and theatre owner, Irving.

In this tidbit, we find Stoker engaged in a conversation with Sir James Knowles, the architect and editor. Knowles is remembered as the architect, who designed amongst other buildings, three churches in Clapham, Lord Tennyson's house at Aldworth, the Thatched House Club, the Leicester Square garden (as restored at the expense of Baron Albert Grant), and Albert Mansions, Victoria Street, Westminster. Clearly, in this passage, however, Stoker is a humble writer, talking to an editor. Luckily, for me, they talk about why writers should move to London.


I may here give an instance of his thoughtful kindness. Since our first meeting the year before, he had known of my wish to get to London, where as a writer I should have a larger scope and better chance of success than at home. One morning, July 12, I got a letter from him asking me to call at 17 Albert Mansions, Victoria Street, at half-past one and see Mr. Knowles. I did so, and on arriving found it was the office of the Nineteenth Century. There I saw the editor and owner, Sir (then Mr.) James Knowles, who received me most kindly and asked me all sorts of questions as to work and prospects. Presently while he was speaking he interrupted himself to say :

"What are you smiling at?”

I answered: "Are you not dissuading me from venturing to come to London as a writer?"

After a moment's hesitation he said with a smile: "Yes ! I believe I am."

"I was smiling to think," I said, "that if I had not known the accuracy and wisdom of all you have said I should have been here long ago!''

That seemed to interest him; he was far too clever a man to waste time on a fool.

Presently he said: “Now, why do you think it better to be in London? Could you not write to me, for instance, from Dublin?"

"Oh! yes, I could write well enough, but I have known that game for some time. I know the joy of the waste-paper basket and the manuscript returned unread. Now Mr. Knowles," I went on, "may I ask you something?"

"You are, if I mistake not, a Scotchman?" He nodded acquiescence, keeping his eye on me and smiling as I went on: "And yet you came to London. You have not done badly either, I understand? Why did you come?"

"Oh!" he answered quickly, "far be it from me to make little of life in London or the advantages of it. Now look here, I know exactly what you feel. Will you send me anything which you may have written, or which you may write for the purpose, which you think suitable for the Nineteenth Century ? I promise you that I shall read it myself; and if I can I will find a place for it in the magazine ! ''

I thanked him warmly for his quick understanding and sympathy, and for his kindly promise. I said at the conclusion: "And I give you my word that I shall never send you anything which I do not think worthy of the Nineteenth Century!"

From that hour Sir James and I became close friends. I and mine have received from him and his innumerable kindnesses; and there is for him a very warm corner in my heart.

Strange to say. the next time we spoke of my writing in the Nineteenth Century was when in 1881 he asked me to write an article for him on a matter then of much importance in the world of the theatre. I asked him if it was to be over my signature.

When he said that was the intention, I said: "I am sorry I cannot do it. Irving and I have been for now some years so closely associated that anything I should write on a theatrical subject might be taken for a reflex of his opinion or desire. Since we have been associated in business I have never signed any article regarding the stage unless we shared the same view. And whilst we are so associated I want to keep to that rule. Otherwise it would not be fair to him, for he might get odium in some form for an opinion which he did not hold ! As a matter of fact we join issue on this particular subject!"

The first time I had the pleasure of writing for him was when in 1890 I wrote an article on "Actor-Managers" which appeared in the June number. Regarding this, Irving's opinion and my own were at one, and I could attack the matter with a good heart. I certainly took pains enough, for I spent many, many hours in the Library of my Inn, the Inner Temple, reading all the "Sumptuary" laws in the entire collection of British Statutes. Irving himself followed my own article with a short one on the subject of the controversy on which we were then engaged.

As Stoker goes on to talk about his relationship with Knowles in the years to come, we see more of Stoker’s deep dedication to his work with Irving, how it became part of his identity - that he wouldn’t even put his name on something that Irving might disagree with. 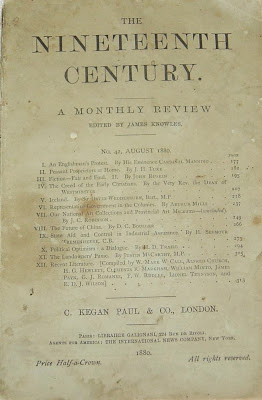