Toys form the subject of many horror movies. These 1890s examples give us some indication of why.

Cat Holes is a combination tiddlywinks game with points marked on each of the holes. My guess is that the object of the game is to get tiddlywinks in the holes, aiming for the most points. 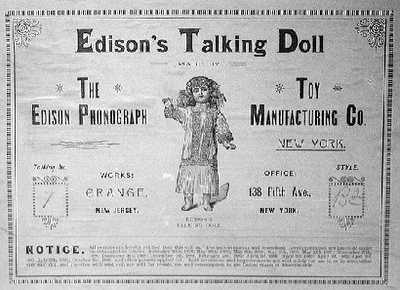 Edison's Phonograph doll contained a 2 1/2" ring-shaped wax cylinder. A child could engage the cylinder by turning a small crank in the doll's back. A spring mechanism reset the phonograph.

Put a coin in by Columbus's feet and an Indian Cief pops up!

A ball toss toy in black face. I don't think I could sleep well after looking at that, and I certainly want to piss it off by throwing balls at it. 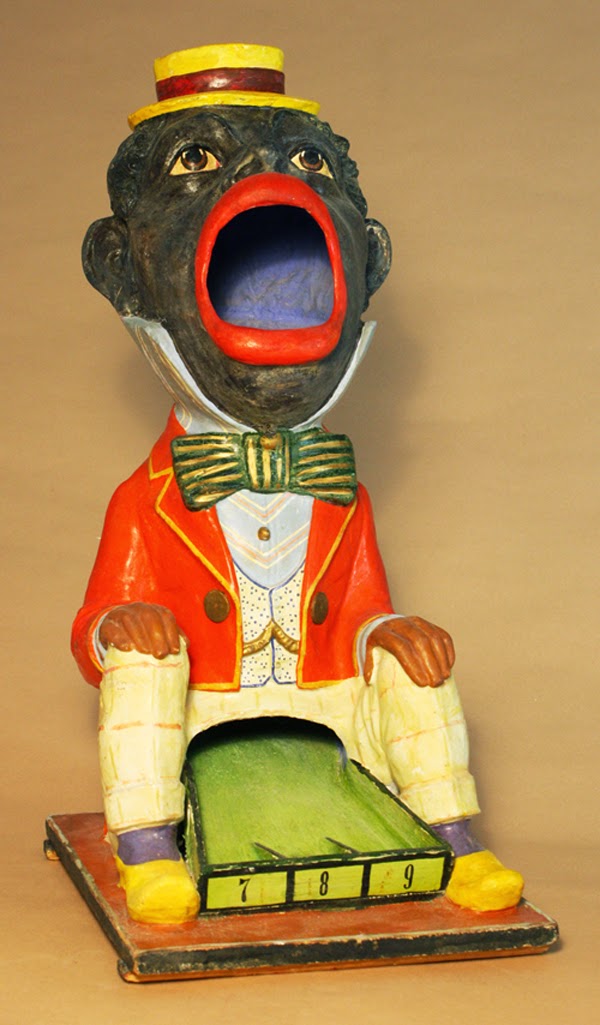 This papier-mâché version from the same year makes it seem that this was a popular motif. Through modern eyes, I look at this and see horrifying racism.

With this iron bank, you can watch mechanical William Tell shoot an apple off his young son's head, as the boy stands in front of a castle tower. Place your coin on Tell's gun, and Tell will take aim. Put down the boy's right arm, and the apple moves to his head. Press Tell's right foot, and the gun fires the coin, which knocks the apple down, as the coin falls into the castle. Tell's head then falls back in relief! For more pics, click here.

And then there were pull toys...

The above may also be an example of the grossest style of Victorian plaything, taxidermy toys. In those days rocking horses used real horse hair, so I'm sure the above is not a vegan creation to say the least.

Just imagine being tucked into a nursery, surrounded by these playthings, and sweet dreams!

If you have enjoyed the work that I do, please consider supporting my Victorian Dictionary Project!
Posted by Tine Hreno at 4:27 PM