The Murder of Mrs and Baby Hogg 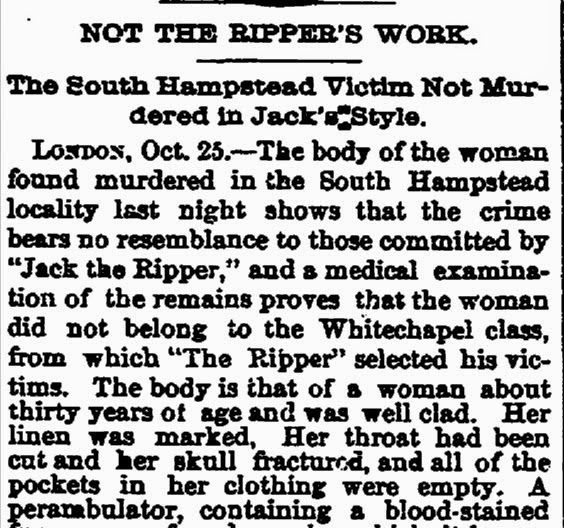 Arthur Conan Doyle once speculated that Jack the Ripper may have been a woman, who could have posed as a midwife and get away with wearing bloody clothes out of doors. It was then suggested that Jill the Ripper could have been Mary Pearcey, the killer of Phoebe Hogg, and her infant daughter, Phoebe Hogg.

Pearcey was convicted of killing her lover's wife and child on 24 October 1890, and executed for the crime two days before Christmas the same year.

Pearcey was born Mary Eleanor Wheeler in 1866. She assumed the name Pearcey after living with a man of that name, who left her because of infidelity. Later, she moved in with the furniture mover, Frank Hogg, who also had a habit of being unfaithful.

When his other lover, Phoebe Styles, became pregnant, he married her. Pearcey insisted upon it. Their little polyamorous family lived in Kentish Town, London, where little Phoebe Hogg was born.

Some eighteen months later, a neighbour heard screaming, and violent fighting in the house. Several hours later, Mrs. Hogg's body was found on a rubbish pile in Hampstead. Her skull was crushed, and her head nearly severed from her body. About a mile away, baby Phoebe's black perambulator was found, its cushions soaked with blood.

That night, witnesses had seen Pearcey pushing the perambulator around London.

Upon searching her house, the police found blood spattered on the walls, ceiling, a skirt, an apron, everywhere... blood stains on a poker and a carving knife.

With her chant, and blood filled perambulator, Pearcey became one of the scariest things in London in 1890. A media sensation, Madame Tussauds wax museum made a wax figure of Pearcey and placed it in their Chamber of Horrors. They they decorated this exhibit with the actual perambulator of Baby Phoebe, and the contents of Pearcey's kitchen (forensic science was still a Sherlockian wet dream in the 1890s). This exhibit drew an opening night crowd of 30,000 people.