I found the most wonderful book today, granted it's from the wrong London (but so am I). 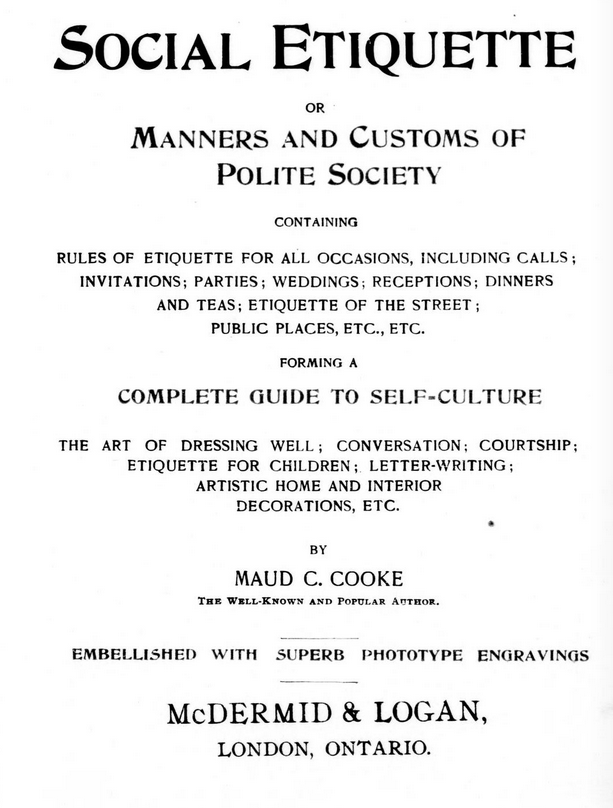 Social Etiquette or Manners and Customs of Polite Society was written by Maud C. Cooke and published in 1896. I found it, while looking for more information on letter writing, so while Social Etiquette covers everything from "Introductions and Salutations" to "How to be Beautiful," I shall focus on those pages which provide an epistolary guide. 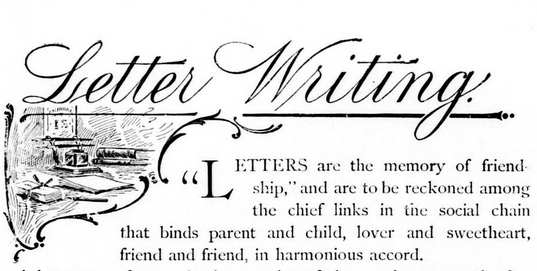 Cooke devotes several pages to the etiquette of letter writing summarizing it all in a list at the end: Some Don'ts and Do's for Letter-Writers. Much of her advice is contradictory and confusing. We are supposed to speak openly and naturally in a letter, but never say too much. Really one should sound like they are saying everything without saying very much at all.

And don't squirm as you think about how to go about this task. There are right and wrong ways to sit, when you are writing a letter, and it's different for ladies than it is for gentlemen. 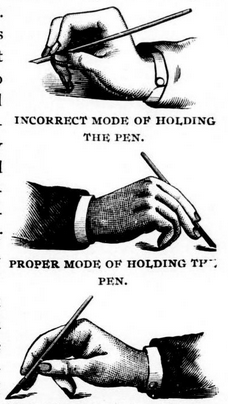 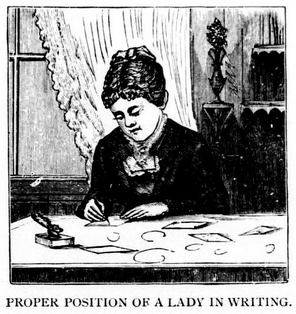 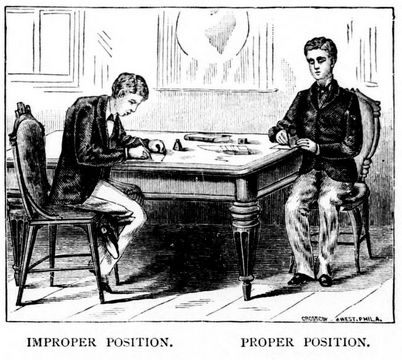 Guides and manuals, like this, were quite popular in the 19th century. Lewis Caroll published Eight or Nine Wise Words About Letter-Writing in 1891. Of course, Caroll took a very tongue-in-cheek approach to an art form that changed from decade to decade. Earlier in the century, ribbons were very popular and letters could be decorated, like ladies visiting cards, but by the 1890s letters were plain - though not very simple.


Some Don'ts and Do's for Letter-Writers

Don’t write an anonymous letter; it is a cowardly stab in the dark.
Don’t pay any attention to an anonymous letter; it is not worth your regard.
Don’t conduct private correspondence on a postal card. Many persons consider this an insult. A purely business message may be thus sent, but even then the slight saving in postage is small recompense for the delay so often attending the delivery of postal cards.
Don’t use a postscript; it is unnecessary, old-fashioned, school-girlish, and in a particular, punctilious letter the omission of any important matter necessitates the rewriting of the entire letter rather than the use of a postscript. In very friendly letters one may be permitted to add the forgotten paragraph in the form of a postscript, omitting, however, the obsolete abbreviation, “P.S.”
Don’t write on a half-sheet of paper unless the nature of the correspondence permits the use of the ordinary business letter-head. If the note is short, write only on one side of the paper, but don’t tear a sheet in half for economy’s sake. The rough, torn edges, denote haste, ill-breeding, or carelessness on the part of the writer.
Don’t use tablet paper for ceremonious letters.
Don’t write on both sides of the paper to any but very intimate friends or relatives, they being disposed to tolerate slight departures from formality on our part.
Don’t meddle with foreign nouns or verbs unless conversant with the language itself; incorrect and ungrammatical usage is too apt to be the unhappy result. Even foreign names and titles should not be used without the exactest care as to their orthography and application.
This rule should be especially remembered with reference to all matters destined to pass through hands editorial.
Don’t erase misspelled words in letters of any moment. Recopy the entire missive.
Don’t quote too constantly.
Don’t underscore your words, unless they express something very important.
Don’t send enclosures in a letter written by some one else; only the greatest intimacy can excuse this practice. Write your own letters and send in a separate envelope.
Don’t write a letter in a towering passion; you would not care to have it confront you in some cooler moment.
Don’t cross the writing in your letters. Life is too short and the time and eyesight of your correspondent too precious for this.
Don’t fill up every available blank space and margin of your letter with forgotten messages. If these are very valuable, add an extra sheet to your letter, thus saving its appearance and the patience of its recipient.
Don’t divide a syllable at the end of a line. The printer may do this, not the letter-writer.
Don’t fall into the habit of using long words in a letter, they show a straining after effect. One should “say,” rather than “observe,” “talk,” rather than “converse,” if one’s missives are to be easy, well-bred and readable.
Don’t refold a letter, the marks always remain to show your carelessness. Fold it correctly the first time.
Do remember to answer all important questions in a letter clearly and decisively.
Do burn the great majority of your letters after answering. Those that are to be kept should be filed away in packages adding date and writer’s name on corner of envelope and by a word or two suggesting the topics with which they deal. This will save time in referring to them.
Do answer your friendly letters with reasonable promptness. To do otherwise is a breach of etiquette. An unanswered letter is an insult, a cut direct. Business letters, of course, must be replied to at once.
Do send a postage stamp when you write a letter of inquiry, the answer to which is of interest only to yourself. A stamped and addressed envelope would be a still better enclosure.
Do, if you are an absent son or daughter, write home promptly and regularly; the comfort this will be to the parents at home, and the pain they suffer at any negligence on your part, cannot be overestimated. Husbands and wives, when separated for a time, would do well to follow this same advice.
Do date your letters carefully. Events and proofs of the greatest importance have hung upon the date of a single letter.
Do put sufficient stamps upon a letter to make sure of no extra postage falling to the lot of your correspondent. 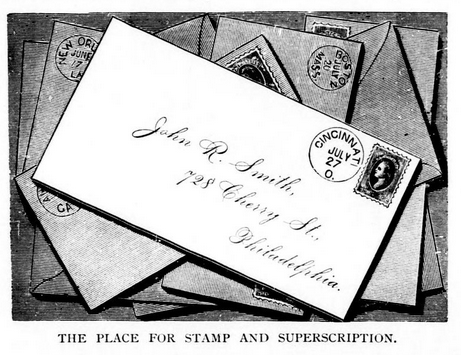 Do put your address plainly in all letters. This ensures a prompt answer and, in case of miscarriage, a speedy return from the Dead-Letter Office.
Do, if a business man or woman, have your address on the outside of your envelope. This will make sure of your uncalled-for letters returning to you immediately. It is well to do this in any case where a little uncertain as to the exact address of your correspondent.
Do read your letters over carefully before sending, that no errors may be overlooked.
Do give every subject a separate paragraph instead of running the whole letter, social items and sentiment, all into one indistinguishable whole.
Do begin the first line of each paragraph, at least, one inch from the margin, of the page.