My characters are gathered around a dining table in one of the most up-scale and scandalous households in 1891 London. A little scandal is all the more reason to be there, but it is no reason to lose sight of all civility. The ideal is to let scandals entertain and amuse you - not to become one (especially not by something so dull as eating the meal).

Dinner, in this house begins, with soup. All respectable dinner parties do. To help my protagonist get it right, I’ve consulted Mrs Beeton's Book of Household Management.


THE GUESTS BEING SEATED AT THE DINNER-TABLE, the lady begins to help the soup, which is handed round, commencing with the gentleman on her right and on her left, and continuing in the same order till all are served. It is generally established as a rule, not to ask for soup or fish twice, as, in so doing, part of the company may be kept waiting too long for the second course, when, perhaps, a little revenge is taken by looking at the awkward consumer of a second portion. This rule, however, may, under various circumstances, not be considered as binding.

Right, so I only get one serving of soup, if I’m to avoid becoming as scandalous as my hostess. What has sploshed into my bowl now?


IT HAS BEEN ASSERTED, that English cookery is, nationally speaking, far from being the best in the world. More than this, we have been frequently told by brilliant foreign writers, half-philosophers, half-chefs, that we are the worst cooks on the face of the earth, and that the proverb which alludes to the divine origin of food, and the precisely opposite origin of its preparers, is peculiarly applicable to us islanders. Not, however, to the inhabitants of the whole island; for, it is stated in a work which treats of culinary operations, north of the Tweed, that the "broth" of Scotland claims, for excellence and wholesomeness, a very close second place to the bouillon, or common soup of France. 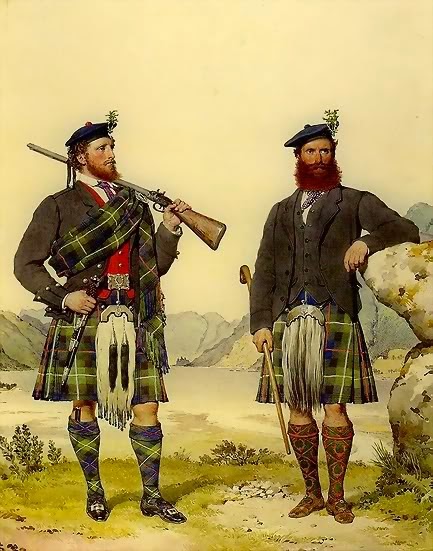 It’s astonishing that the English have known so long that their cooking was so bad for so long, but I’m happy to say that I know the delicious Scottish broth, to which Mrs. Beeton refers. It’s thick and incredibly filling. The meat is perfectly in balance with all of the other ingredients and my grandpa used to make it.

However, the first Sottish soup recipe I found perusing Mrs. Beeton’s book made me wish I wasn’t so curious! 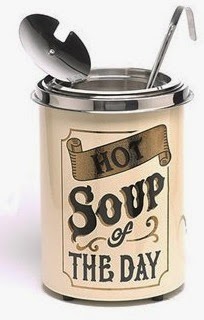 INGREDIENTS.
Half an ox-head or cow-heel, a teacupful of toasted oatmeal, salt to taste, 2 handfuls of greens, 3 quarts of water.

Mode.
Make a broth of the ox-head or cow-heel, and boil it till oil floats on the top of the liquor, then boil the greens, shred, in it. Put the oatmeal, with a little salt, into a basin, and mix with it quickly a teacupful of the fat broth: it should not run into one doughy mass, but form knots. Stir it into the whole, give one boil, and serve very hot.

Seasonable all the year, but more suitable in winter. Sufficient for 10 persons.

Of course, the off-putting aspect was the boiled head or foot. According to Mrs. Beeton, heads were of great importance in Scottish cookery.


IMPORTANCE OF THE BOAR'S HEAD, SCOTTISH FEUDS, &c. The boar's head, in ancient times, formed the most important dish on the table, and was invariably the first placed on the board upon Christmas-day, being preceded by a body of servitors, a flourish of trumpets, and other marks of distinction and reverence, and carried into the hall by the individual of next rank to the lord of the feast. At some of our colleges and inns of court, the serving of the boar's head on a silver platter on Christmas-day is a custom still followed; and till very lately, a bore's head was competed for at Christmas time by the young men of a rural parish in Essex. Indeed, so highly was the grizzly boar's head regarded in former times, that it passed into a cognizance of some of the noblest families in the realm: thus it was not only the crest of the Nevills and Warwicks, with their collateral houses, but it was the cognizance of Richard III., that

"Wretched, bloody, and usurping boar,
That spoil'd your summer fields and fruitful vines,
Swills your warm blood like wash, and makes his trough
In your embowell'd bosoms,"

and whose nature it was supposed to typify; and was universally used as a sign to taverns. The Boar's Head in Eastcheap, which, till within the last twenty-five years still stood in all its primitive quaintness, though removed to make way for the London-bridge approaches, will live vividly in the mind of every reader of Shakspeare, as the resort of the prince of Wales, Poins, and his companions, and the residence of Falstaff and his coney-catching knaves, Bardolph, Pistol, and Nym; and whose sign was a boar's head, carved in stone over the door, and a smaller one in wood on each side of the doorway. 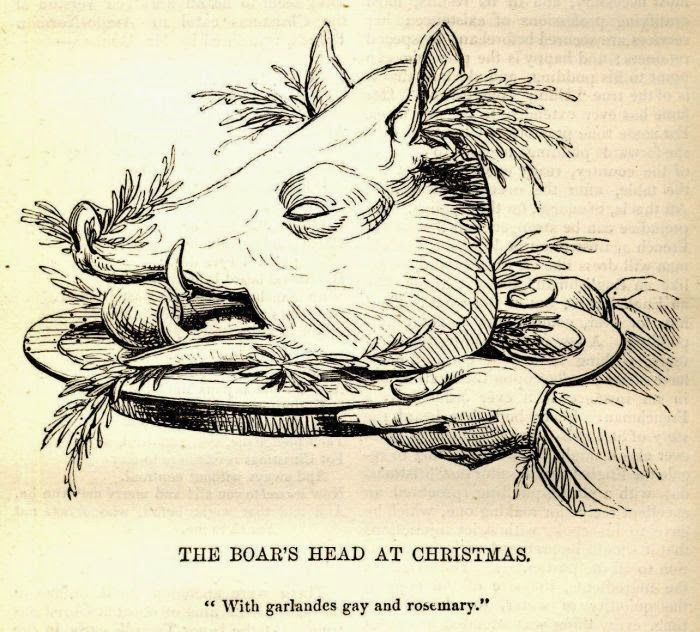 Most people agree that, historically, people were weird, and Victorians were kooky and even a little prissy. I have known all along that Victorians ate some weird food, and when Mrs. Beeton puts boiled heads in the context of her island’s history it begins to make more sense. I begin to imagine my Scottish grandfather’s graandfather serving him Scotch Broth at a wooden table in a room with a stuffed boar’s head on the wall, as he recounted the stories that Mrs. Beeton inserted into her book on household management.


The traditions and deeds of savage vengeance recorded in connection with this grim trophy of the chase are numerous in all parts of Europe. But the most remarkable connected with the subject in this country, were two events that occurred in Scotland, about the 11th and 15th centuries.

A border family having been dispossessed of their castle and lands by a more powerful chief, were reduced for many years to great indigence, the expelled owner only living in the hope of wreaking a terrible vengeance, which, agreeably to the motto of his house, he was content to "bide his time" for. The usurper having invited a large number of his kindred to a grand hunt in his new domains, and a feast after in the great hall, returned from the chase, and discovering the feast not spread, vented his wrath in no measured terms on the heads of the tardy servitors. At length a menial approached, followed by a line of servants, and placing the boar's head on the table, the guests rushed forward to begin the meal; when, to their horror, they discovered, not a boar's but a bull's head, a sign of death. The doors were immediately closed, and the false servants, who were the adherents of the dispossessed chief, threw off their disguise, and falling on the usurper and his friends, butchered them and every soul in the castle belonging to the rival faction.

A tribe of caterans, or mountain robbers, in the Western Highlands, having been greatly persecuted by a powerful chief of the district, waylaid him and his retinue, put them all to the sword, and cutting off the chief's head, repaired to his castle, where they ordered the terrified wife to supply them with food and drink. To appease their savage humour, the lady gave order for their entertainment, and on returning to the hall to see her orders were complied with, discovered, in place of the boar's head that should have graced the board, her husband's bleeding head; the savage caterans, in rude derision, as a substitute for the apple or lemon usually placed between the jaws, having thrust a slice of bread in the dead man's mouth. 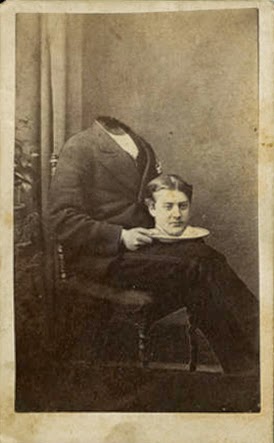 The last tale sounds like an episode of American Horror Story or Game of Thrones! And I’m not sure how it made animal heads any more palatable to Mrs. Beeton’s Victorian readers.

However, I’ve gone entirely off topic and nearly abandoned the wonderful soup Mrs. Beeton initially told us about. As I’m often distractible and not planning to have them serve Scottish broth at the dinner party in my novel, I lost patience trying to find the recipe in Mrs. Beeton’s book, but let Google answer that question for me. BBC food has a good recipe here, which made me think that we’ve just replaced the boiled head with “stock” because that’s basically what you’d get after following Mrs. Beeton’s instructions.

For the purpose of my story, I think my wealthy and scandalous 1891 dinner hostess will be serving Mrs. Beeton’s Almond Soup.

Mode.
Boil the beef, or veal, and the mutton, gently in water that will cover them, till the gravy is very strong, and the meat very tender; then strain off the gravy, and set it on the fire with the specified quantities of vermicelli, mace, and cloves, to 2 quarts. Let it boil till it has the flavour of the spices. Have ready the almonds, blanched and pounded very fine; the yolks of the eggs boiled hard; mixing the almonds, whilst pounding, with a little of the soup, lest the latter should grow oily. Pound them till they are a mere pulp, and keep adding to them, by degrees, a little soup until they are thoroughly mixed together. Let the soup be cool when mixing, and do it perfectly smooth. Strain it through a sieve, set it on the fire, stir frequently, and serve hot. Just before taking it up, add the cream.

Seasonable all the year.

I'll have to remember not to let my protagonist ask for a second helping!