Symptoms of coulrophobia can include sweating, nausea, feelings of dread, fast heartbeat, crying or screaming, and anger at being placed in a situation where a clown is present. - Source

Coulrophobia is the fear of clowns. It's Halloween, so don't unfriend, or unfollow me, for writing this post. Last October, I wrote a series of scary posts and I'm up to the same tricks this year.

At the beginning of the nineteenth century, one of the most influential clowns was performing in London and his name was Joseph Grimaldi (1776-1837). Gimaldi was a Regency era stage performer, who expanded the role of the clown in British pantomime in the early 1800s. Grimaldi so dominated the comic stages of London that the harlequinade role of clown bears his name, "Joey," and his whiteface makeup design remains in use to this day.

Grimaldi's son tried to follow in his footsteps, but was never as successful as his father and, like his father became an alcoholic. He took his financial problems out on his parents, until his life came to an early end. After the son died, Grimaldi and his wife attempted suicide together, but failed and resolved to go on living what had turned into an impoverished life. Grimaldi outlived his wife by three years.

Meanwhile, in France, Jean-Gaspard Deburau (1796-1846) was going to court for killing a boy with his cane, after the boy insulted him on the street in 1936. Deburau was famous for playing the clown, Pierrot.


Certainly the violent and sometimes sinister cruelty that Debrau brought to his role had at least part of its source in the brooding rancor of his own temperament. On a spring day in 1836, he had shown to what lengths this rancor could carry him, when, while strolling with his young wife and shildren, he had warmed to anger under a street-boy's taunts and brought his heavy cane down on the young man's skull, killing him with a single blow. The court had acquitted the fashionable mime, but his act seemed to darken the already deepening shadows of Pierrot's billowy tunic. - Robert F. Storey, Pierrot: A Critical History of a Mask, 2014.

Having been acquitted of murder, Deburau carried on his clowning career. He didn't by any means invent the character of Pierrot, but introduced the signature black skull cap and collarless shirt to the role. Pierrot, as a character, leaves a lot of room for actors to express their own clowning style; eDeburau is not even seen as the most influential incarnation of Pierrot in that era.

In 1839, Paul Legrand (1816-1898) took to the French stage as Pierrot. Legrand is said to have brought dramatic realism to the role, greatly influencing pantomime as an art form.

Félicia Mallet played another version of Pierrot toward the end of the century. Although she became better known as a singer, than a clown, George Bernard Shaw said of her role as Pierrot that:


Felicia Mallet is much more credible, much more realistic, and therefore much more intelligible — also much less slim, and not quite so youthful. Litini was like a dissolute "La Sylphide": Mallet is frankly and heartily like a scion of the very smallest bourgeoisie sowing his wild oats. She is a good observer, a smart executant, and a vigorous and sympathetic actress, apparently quite indifferent to romantic charm, and intent only on the dramatic interest, realistic illusion, and comic force of her work. And she avoids the conventional gesture-code of academic Italian pantomime, depending on popularly graphic methods throughout. - George Bernard Shaw in James Huneker, Dramatic Opinions and Essays by G. Bernard Shaw: Containing as Well A Word on the Dramatic Opinions and Essays, of G. Bernard Shaw, 1913.

Grimaldi's signature red triangle cheeks reappeared the face of James Frowde (1831-1899) and many other clowns throughout the world. Frowde was an English clown and evangelical preacher, who married an equestrian performer from a circus family. While families, like Grimaldi's, suffered financial hardships, Victorians considered circus performers little better than beggars in England. That being said, not all circus families were so hard up. Frowde's father owned the circus he performed in: Hengler's Circus.


Hengler's Circus which prospered during the 1850s travelled under a series of different headings such as 'Hengler's Colossal Hippodrama and Grand Cirque Variety', Hengler's Colossal Moving Hippodrama and National Circus' and Hangler's Mammoth Circus and Great Equestrian Exhibition'. Even its catchphrase 'Amusement for the Million and Reational Recreation' reflects a switch to more demotic and pragmatic ambition as an impression of royal appointment is traded in for a democratically minded image of a judiciously balanced mass entertainment. - Helen Soddart, Rings of Desire: Circus History and Representation, 2000.

In that variety of names I see the clown shifting from the theatre with its stationary stage to the art of the spectacle and its travelling rings. I see the family politics of showcasing Frowde's equestrian wife. I also see an industry that had to compete with the American's Buffalo Bill's Wilde West Show.

As American culture penetrated circus and theatre clowning in Europe, it's important to mention Dan Rice (1823-1900), an American clown, who is seen as the inspiration for Uncle Sam and was so popular that he ran for president in 1868. 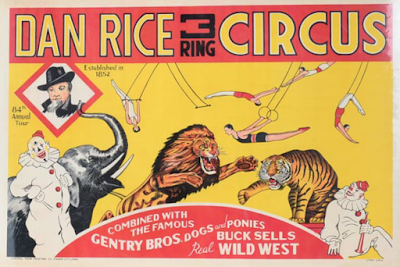 Keeping up with the competition of the times, he coined the "One-Horse Show" and "Greatest Show" terms. Rice became one of America's first pop-culture icons and helped make the circus what it is today by combining a variety of acts, like animals and acrobats and, of course, clowns.

For a period in the 1840s, he even performed in blackface. As his fame grew, he starred in song-and-dance parodies of Shakespeare, including "Dan Rice's Version of Othello" and "Dan Rice's Multifarious Account of Shakespeare's Hamlet." He's said to have been vaudeville before there was a vaudeville.


Rice was not simply funnier than other clowns; he was different, mingling jokes, solemn thoughts, civic observations, and songs. - David Carlyon, Dan Rice: The Most Famous Man You've Never Heard Of, 2004.

Gilbert and Sullivan's first collaboration incorporated a pair of clowns who adopted the mannerisms of both Grimaldi and Rice. Harry (1833-1895) and Fred Payne (1841–1880) were collectively known as the Payne Brothers.

Harry was Covent Garden's clown throughout the 1860s, a role once played by Grimaldi.

Harry was to clowning in London what Dan Rice was to the United States.

Every Boxing Day Harlequinade at Drury Lane opened with Harry's cheer-filled somersault and catchphrase: "Here we are again!" His obituary in the Times said:


Mr. Payne was at once an actor, a singer, and an accomplished humourist. Probably he owed something to the tuition of his father … whose mimetic feats he would seek to emulate as much as the altered conditions of pantomime entertainments would permit.

These were by no means all of the clowns that had an impact on the art of clowning in the nineteenth century, but they were the best ones I could find with pictures. I would love to hear more about why Deburau was acquitted for killing that boy who insulted him in the street. If you know more, please share in the comments.

In the meantime, enjoy these photos of clowns in the 1890s:

If you have enjoyed the work that I do, please consider supporting my Victorian Dictionary Project!
Posted by Tine Hreno at 8:41 AM