Flirtation, Calling, and Escort Cards: the social media of the 1890s

It's Christmas card time and I stumble upon the headline: "The 19th Century 'Escort Cards' with Pick-up Lines You Definitely Haven't Heard Before." The cards are lovely, but the headline is baiting. The escort card was one of many innocent types of Victorian cards. Escort, or "flirtation," cards were so commonplace that one American grocer adopted their style for an advertisement in 1900.

1880s and 1890s flirtation cards came in two varieties: the calling card, and the escort card. The calling cards were used to formally introduce oneself to an acquaintance. A gentleman looking for love might have had a set of these printed up with his name on them to be used as an icebreaker at formal gatherings. The escort card was a novelty, reserved for more casual interactions.

Mid-century advancements in print making led to a proliferation of ephemera, like these and a great variety of other cards that helped people navigate the strict rules of middle-class etiquette. Like acronyms on the internet today, the verbal and non-verbal messages on the cards were a short-cut to communication understood by all who used them.


"To the unrefined or under-bred, the visiting card is but a trifling and insignificant bit of social paper; but to the cultured disciple of social law, it conveys a subtle and unmistakable intelligence. Its texture, style of engraving, and even the hour of leaving it, combine to place the stranger, whose name it bears, in a pleasant or a disagreeable attitude, even before his manners, conversation and face have been able to explain his social position." John Young, Our Deportment (1890).

Most commonly the calling card was left at the house of someone you wanted to visit. If the recipient wanted you to visit, they would send you their card. If no card was sent, or your reply card came back in an envelope, you weren't to return. The size of a gentleman's card indicated his marital status. Women's cards were always bigger than men's. During a first visit, a gentleman would leave a card for each lady in the household. Blank spaces on the cards could be used to write notes. Flirtation and escort cards filled those spaces with prepared messages.

If there was a late-Victorian social pastime greater than flirting, it was mourning. The symbols and decorations on mourning communicated the social status of the mourners and social status was, as it is, aspirational. 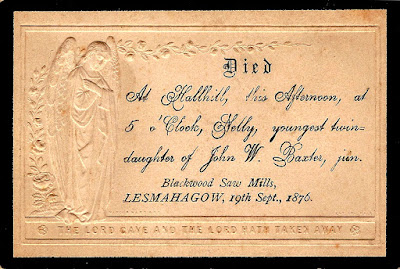 These cards were presented to everyone who attended the funeral.

When public figures, like Abraham Lincoln, passed, print shops around the world manufactured and sold the cards as collectibles and people most certainly collected them.

Albums for collection and display of cards were a common fixture in Victorian parlours. Printing a new card was like writing a Facebook status update in that you used it to communicate what you were interested in at the moment to your peers. Because the printing of cards was relevant to a wide range of social activities a collection of cards served as an entertaining record of all that had passed in your social network. When people didn't follow the proper usage of cards (like oversharing on Facebook), they faced social consequences (blocked/unfriended).

Someone said recently that in the age of social media, millennials have begun remembering their lives in the present moment, by documenting and sharing everything that happens to them. Cards were the Victorian way of doing the same thing - even allowing young couples to flirt in plain sight.