What is so Victorian about an octopus?

Was it the shape of a Victorian dress, a hairdo, or something else entirely? From the octopus tattoo to the etsy iPhone case, consumers of contemporary Victorian culture love octopi. What is so Victorian about an octopus?

"Twenty Thousand Leagues Under the Sea" is a touchstone in the Steampunk literary canon and the image from both stories of seamen/workers fighting a many armed (tentacled) beast/industrial complex made a strong impression in nineteenth century. If you look at Hugo's illustration long enough, you start to see a human head above the eyes. The many curling arms represent the many ways in which a powerful enemy can control the world around it. This image likely inspired further works, like Frank Norris's "The Octopus: A Story of California" (1901).

Do I give all the credit for this to Victor Hugo? Not exactly. Remember the cartographic land octopus?


"This Cartographic Land Octopus can be a representation of fear and revolution. Once a reader sees this sea creature image, it gives a feel of horror and fear. Black propaganda maps used this Cartographic Land Octopus to portray how a country takes power over other nation by its tentacles spread over the other areas. Its tentacles can be the reason why this creature is Cartography’s favourite land monster. It represents evil spread over the lands and its head, the center of wicked intelligence" source.

Cartographic propaganda dates back to the Middle Ages and kraken appear on maps for much of that history. The difference between the kraken and the land octopus is location and function. Cartographers used kraken to fill up empty or unknown areas of water. The first land octopus didn't appear until Fred Rose's "Serio-comic war map for the year 1877." Rose's land octopus portrayed the Russian Empire as stretching out its tentacles to take control of Europe. Russia continued to appear as an octopus on propaganda maps through the Second World War.

Rose, however, was a cartoonist - not a proper cartographer by any stretch of the imagination. Appearing eleven years after Hugo's industrial-capitalist octopus and seven years after Verne's, Rose's land octopus was most certainly influenced by the literature, but had its own impact as a late-Victorian propaganda icon. Literature inspired the creation of the land octopi and land octopi prevailed.

Versions of Rose's cartoon map were translated and adapted to different languages. Subsequent cartoonists portrayed Russia as an octopus in the World Wars. Even Vladimir Putin hasn't been able to escape the land octopus characterization of Russia. 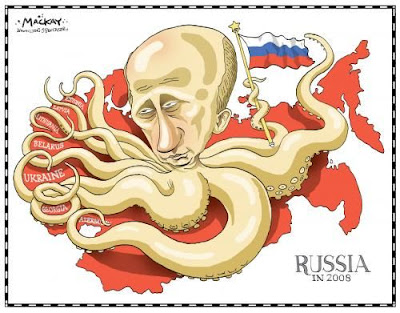 See more images of land octopi in Popular Science's "A Brief History of Octopi Taking Over the World."