Dancing Through Literature in the 1890s 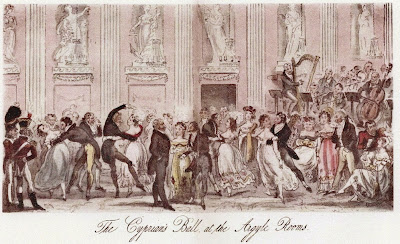 I’ve spent the past week struggling to write a scene in which my characters are dancing at a ball in 1890. Invariably, it comes off sounding like the script of a corny romantic comedy from the 1950s, which conveys none of the feelings I want to get across.

Next, it occurred to me that writers don’t often put dance scenes into literature. Dance is, in many respects, a visual art that best suited to film. That’s why it sounded like I was writing a script, surely! But movies didn’t have dance scenes or plots in the 1890s, so I dug deeper to find out more about how my writers (the characters in my novel) felt about dancing in the 1890s.

What I found surprised me.

First, the verb ‘to dance’ is most commonly used in English fin-de-sciélé literature in descriptive passages to describe things, not people: the leaves dance on the trees, the flames dance on a log, and so on.


With yells of triumph the Indians came flocking down from their caves and danced a frenzied dance of victory round the dead bodies, in mad joy that two more of the most dangerous of all their enemies had been slain. - The Lost World by Arthur Conan Doyle

In his only novel, Oscar Wilde includes a scene about dancing, but it’s not in a ball room and it is used to make the woman dancing look less appealing.


The scene was the hall of Capulet's house, and Romeo in his pilgrim's dress had entered with Mercutio and his other friends. The band, such as it was, struck up a few bars of music, and the dance began. Through the crowd of ungainly, shabbily dressed actors, Sibyl Vane moved like a creature from a finer world. Her body swayed, while she danced, as a plant sways in the water. The curves of her throat were the curves of a white lily. Her hands seemed to be made of cool ivory.

Yet she was curiously listless. She showed no sign of joy when her eyes rested on Romeo. The few words she had to speak--

Good pilgrim, you do wrong your hand too much,
Which mannerly devotion shows in this;
For saints have hands that pilgrims' hands do touch,
And palm to palm is holy palmers' kiss--

with the brief dialogue that follows, were spoken in a thoroughly artificial manner. The voice was exquisite, but from the point of view of tone it was absolutely false. It was wrong in colour. It took away all the life from the verse. It made the passion unreal.

Basically, Wilde is using dance to give us an example of bad acting. Sure, Sybil Vane is beautiful, but, now that she is in love with Dorian Gray, she can’t act. 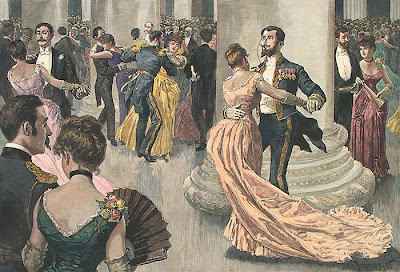 As I scanned the literature of the 1890s, I found love and bad acting to be recurring themes in literary scenes of ballroom dancing. In Violet Hunt’s The Maiden’s Progress, while Moderna is getting ready for a ball, Peggy says: “I wonder who you'll dance with? Perhaps you'll meet your Fate?” And Verona adds, pensively: “The ‘Unknown God.’ Father says every young girl raises altars to the ‘Unknown God.’ I wonder.” When Moderna returns from the ball, they both say at once: “Was it nice? Who did you dance with? Are you engaged? Did you get many compliments?” When Moderna gets rid of those meddlers, she writes in her diary:


My first ball. It is 4 A.M. Minching and Peggy and Verona have just left me. I must try and recall the events of the evening. I had a white dress trimmed with lilies of the valley rather pretty. Cecilia Riddell had daisies. Aunt Riddell had diamonds. What waste ! I danced twenty-one times twice with the son of the house. I danced three times with a Mr. Donkin. I can't remember whether it was twice or three times with Mr. Deverel. I danced the Lancers with Edward; and I went in to supper once with Mr. Vere and once with Edward. That is all I can remember. I was decidedly nervous at first. I don't think people thought me pretty there were such lots of awfully pretty girls there. They seemed to know everybody so well, and they all looked older than I. I look too dreadfully young. Cissy Riddell looked a perfect infant in her rational Liberty frock, that's one consolation. Mrs. Mortimer was kind. She said, "Who did your hair, child?" and gave it three pats that quite altered it.

So, that’s one example of how a woman might feel about dancing in the 1890s. What about her love interest? Why does he go to balls?


I suppose in the vague hope of meeting some day with a real woman, and talking to her. It is one of the very few social opportunities one has of doing so. A dinner party is complicated with eating how can two immortal souls communicate with each other through a medium of 'steaming soup, or the fumes of the roast, or at a musicale where one is constantly " hushed," until one's blood boils? But at a dance, social convention has decreed that one should have a woman to oneself for a quarter of an hour at least. I singled you out at once, and hoped that you would let me speak to you I was introduced, wasn't I? 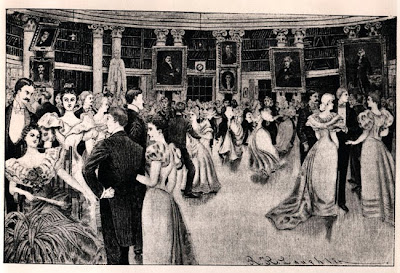 Much as it continues to be today, dancing in the 1890s, was a mating ritual. Hunt writes hilariously in A Hard Woman that: "I don't think married women have any business to dance at all. [...] Dances aren't intended for them." But married women do go to dances. And, at a time when women really couldn’t just say what they thought or ask for what they wanted, dancing at a ball could be an effective weapon, as in Lady Windermere’s Fan.


I feel that every woman here sneers at me as she dances by with my husband. What have I done to deserve this?

But, I found that dancing didn’t just happen at balls or in North America when the indigenous people were attacking. In Paris, Marie Corelli describes the can-can, like it is going to destroy society!

...while I tried to urge my muddled intelligence into a clearer comprehension of all that was going on, the crowd suddenly parted asunder with laughter and shouts of applause, and standing back in closely pressed ranks made an open space in their centre for the approach of two women discreetly masked, — one arranged in very short black gauze skirts, the other in blood-red. Attitudinizing for a moment in that theatrical pose which all dancers assume before commencing the revolutions, they uttered a peculiar shout, half savage, half mirthful, — a noisy burst of music answered them, — and then, with an indescribable slide forward and an impudent bracing of the arms akimbo, they started the "can-can,” — which though immodest, vile, vulgar, and licentious, has perhaps more power to inflame the passions of a Paris mob than the chanting of the 'Marseillaise.' It can be danced in various ways, this curious fandango of threatening gesture and amorous invitation,— and if the dancers be a couple of heavy Paris laundresses or perilously it will probably be rendered so ridiculously as to be harmless. But, danced by women with lithe, strong, sinuous limbs — with arms that twist like the bodies of snakes, — with bosoms that seem to heave with suppressed rage and ferocity, — with eyes that flash hell-fire through the black eye-holes of a conspirator-like mask, — and with utter, reckless, audacious disregard of all pretense at modesty, — its effect is terrible, enraging!— inciting to deeds of rapine, pillage, and slaughter! And why ? Why, in Heaven's name, should a mere dance make men mad? Why ? — Mild questioner, whoever you are, I cannot answer you! Why are men made as they are? — will you tell me that? Why does an English Earl marry a music-hall singer ? He has seen her in tights, — he has heard her roar forth vulgar ditties to the lowest classes of the public, — and yet he has been known to marry her, and make her ^^ ray lady " — and a peeress of the realm ! Explain to me this incongruity, — and I will explain to you then why it is that the sight of the " can-can " danced in all its frankness, turns Parisian men for the time being into screeching, stamping maniacs, whom to see, to hear, to realize the existence of, is to feel that with all our ^ culture,' we are removed only half a step away from absolute barbarism!

All of this makes me think that I should save the dancing for more dramatic moments in my story, if I include any at all. Even W.B. Yeats identified the love of a dancer as brief.