The Daily Post published this piece on 30 December 1891, so the incident had already passed and New Year's Eve was approaching. 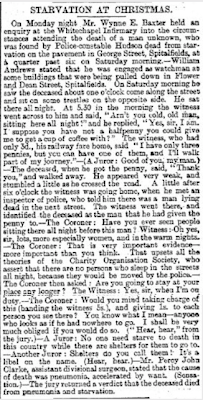 On Monday night Mr. Wayne E. Barter held an enquiry at the Whitechapel infirmary into the circumstances attending the death of a man unknown, who was found by Police-constable Hudson dead from starvation on the pavement in George Street, Spitalfields, at a quarter past six on Saturday morning. - William Andrews stated that he was engaged as watchman at some buildings that were being pulled down in Flower and Dean Street, Spitalfields. On Saturday morning the witness went across to him and said, "Aren't you cold, old man, sitting here all night?" and he replied, "Yess, sir, I am. I suppose you have not a halfpenny you could give me to get a cup of coffee with?" The witness, who had only 3d., his railway fare home, said, "I have only three pennies, but you can have one of them, and I'll walk part of my journey." - (A Juror: Good of you, my man.) - The deceased, when he got the penny, said, "Thank you," and walked away. He appeared very weak, and stumbled a little as he crossed the road. A little after six o'clock the witness was going home, when he met an inspector of police, who told him there was a man lying dead in the next street. The witness went there, and identified the deceased as the man he had given the penny to. - The Coroner: Have you ever seen people sitting there all night before this man? Witness: Oh yes, sir, lots more especially women, and in the warm nights. - The Corner then asked: Are you going to stay at your place any longer? The Witness: Yes, sir, when I'm on duty. - The Corner: Would you mind taking charge of this(handing the witness 5s.), and giving 1s. to each person you see there? You know what I mean - anyone who looks as if he had nowhere to go. I shall be very much obliged if you would do so. ("Hear, hea," from the jury.) - A Juror: No one need starve to death in this country while there are shelters for them to go to. - Another Juror: Shelter do you call them: It's a libel on the name. (Hear-hear.) Mr. Percy John Clarke, assistant divisional surgeon, stated that the cause of death was pneumonia, accelerated by want. (Sensation.) - The jury ventured a verdict that the deceased died from pneumonia and starvation.


Though these kinds of things happen all year, it seems more tragic at Christmas, while people celebrate the illusion of plenty. The cartoon illustrates the juror's contempt for London's night shelters for the homeless, as well as demonstrating why many homeless people might prefer to sleep on the street. 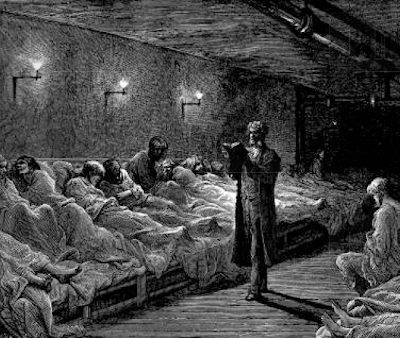