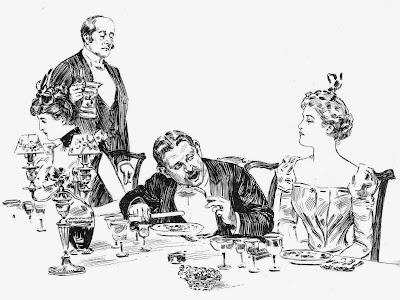 I found these two accounts of a dinner party, here, and just had to share because I don’t want to forget about them. The dinner party took place on 25 July 1888 at the Criterion, when the Society of Authors held a dinner for some American writers, including Henry James. Some of the British writers in attendance included Wilkie Collins, Walter Besant, Oscar Wilde, and Edmund Gosse.

With all of these important people present, Gosse was in charge of the seating arrangement. 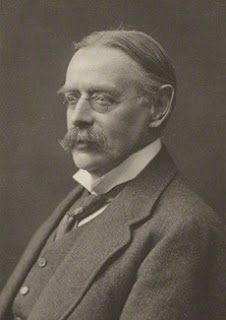 In his writing, Wilde made some dinner parties seem like adventures. According to this account, by the secretary of the society, James Stanley Little, Wilde had a knack for doing that in real life too (though not all adventures are entirely pleasant)!


When I arrived at the Criterion another difficulty presented itself. I was immediately confronted by Oscar Wilde who, in his inimitable manner, upbraided me for having seated him at the table next to Lady Colin Campbell [who had recently referred to Wilde as ‘the great white slug’]. As I turned away with the assurance I would see if I could re-shuffle the name tickets, Lady Colin approached me with bitter reproaches on her lips, she being no less dissatisfied with her neighbour. Both being Irish, it may be imagined that their descriptions one of the other did not lack picturesque vividness. I had no previous knowledge, of course, that there was an old-standing war to the knife between these two. Well I had to keep smiling, welcoming guests, introducing, etc., though I was suffering the tortures of the damned, and how I got through that dinner without collapsing is a mystery to me to this day.

Like all good adventures, I’m sure Little looked forward to the dinner; he clearly regretted it, while it was happening; and thought fondly of it after the fact. The next day, he wrote to Besant:


We scored a brilliant success last night. The reports and leaders in this morning's papers are, I think, all that could be desired. The various American guests expressed to me their feeling of satisfaction and I believe the evening went off without a hitch ... I don't know how far the dinner was successful from a culinary standpoint, as I was only able to eat the devilled lobster which was certainly admirable.

However, Wilde would later recommend to Little:

I can only hope that if the Society gives another banquet the arrangement of the guests will not be left to a person like Gosse.