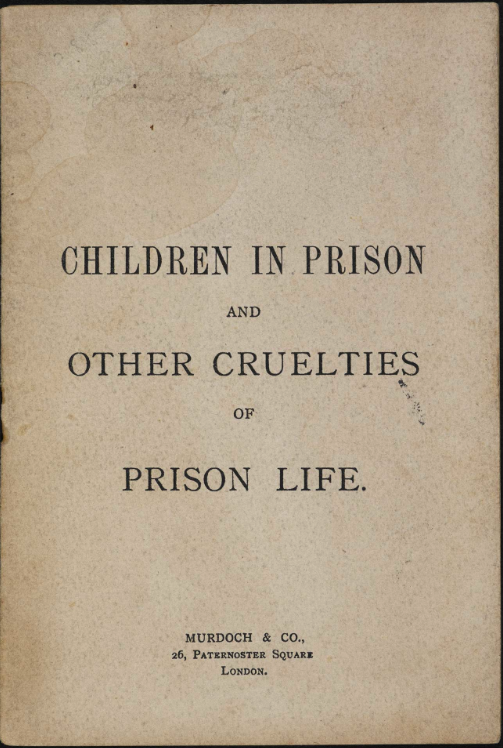 On 25 May 1895, at the height of his career, Oscar Wilde was convicted of gross indecency and sentenced to two years' hard labour. Wilde and his fellow inmates faced a regimen of "hard labour, hard fare and a hard bed." Accustomed to all of the finest things in life and utterly shunned by the public, who once adored him, Wilde simply could not bare prison life. His health declined sharply, and that November he collapsed from illness and hunger, rupturing his right ear drum in the fall. Within a few short years this injury would lead to his death.

After serving his sentence, Wilde remained concerned for some of the younger inmates at Reading Gaol. In February 1898, he published "Children in Prison and Other Cruelties of Prison Life." The publisher's note appears as follows: 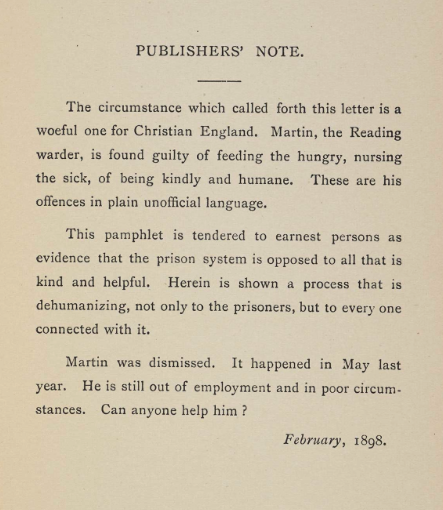 The pamphlet begins by addressing the editor of the Daily Chronicle:


Sir, - I learn with great regret, through an extract from the columns of your paper, that the warder Martin, of Reading Prison, has been dismissed by the Prison Commissioners for having given some sweet biscuits to a little hungry child. I saw the three children myself on the Monday preceding my release. They had just been convicted, and were standing in a row in the central hall in their prison dress, carrying their sheets under the arms previous to their being sent to the cells allotted to them. I happened to passing along one of the galleries on my way to the reception room, where I was to have an interview with a friend. They were quite small children, the youngest - the one to whom the warder gave the biscuits - being a tiny little chap, for whom they had evidently been unable to find clothes small enough to fit. I had, of course, seen many children in prison during the two years during which I myself was confined. Wandsworth Prison, especially, contained always a large number of children. But the little child I saw on the afternoon of Monday, the 17th at Reading, was tinier than any one of them. I need not say how utterly distressed I was to see these children at Reading, for I knew the treatment inshore for them...

Wilde published Children in Prison as an attempt to publicize and promote action to end the scandal of child prisoners incarcerated in British jails. The pamphlet was first published in letter form to the editor of the Daily Chronicle newspaper in 1897. In prison Wilde saw the many young boys locked up with adults, who posed various dangers to the young boys, causing them ‘sheer terror.’ Many children were locked away in near darkness for 23 hours each day, and fed only on water and ‘badly baked’ bread.

To draw attention to the scandal, Wilde describes the case of warden Thomas Martin, who was dismissed from his post for offering a biscuit to a child found to be ‘crying with hunger’. Wilde advocated that no child be imprisoned for any reason if they were less than 14 years old.

You can see the entire pamphlet online through the British Library. The library has introduced a wonderful new resource, "Discovering Literature: Romantics and Victorians," which makes available over 1,200 Romantic and Victorian Literary treasures.