Throughout history, teenagers have rebelled against their parents. Popular psychology maintains that youthful rebellion helps young people build their own identity, separate from their parents. It happens in every class, culture, and race, so of course it happened in the Victorian Era.

You may say: "but Victorians were so proper!"


"Myths about the Victorian family are almost as numerous as those about the American West. Many regard the institution as a model for modern life, full of dutiful children and loving parents. Others see it as an example to avoid -- rigidly patriarchal, unloving, and riddled with class and gender restrictions. Both views, though too generalized, contain some truth, partly because of the tremendous variety of family lives during Queen Victoria's reign. Good or bad, families were the most important factor in a child's success in life" - Ginger S Frost.

Even today, we tend to attribute the tendency to rebel with trouble in the individual, sometimes linking rebellious behaviour with the early signs of a psychopathic personality. Though teen rebellion often seems selfish, fed by boredom and glib, it generally has nothing to do with those traits in the person, but more to do with what one is rebelling against. 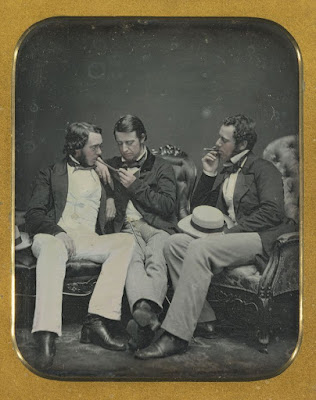 Young middle and upper-class Victorians became social reformers, committed to mending the injustices perpetrated by their society and sometimes within their own families. Young Victorians, like Bram Stoker, became aware of the problems associated with alcoholism and other addictions. The era saw the rise of the suffragette and educational reforms to help the poor. Of course, some young women started smoking and drinking to irritate their parents and some young men dressed below their station, so they could sneak into the poorer neighbourhoods for a bit of slumming - not all rebels are altruistic. We all had that friend who made us aware of broader social problems by personifying them.

Although teen rebellion was wide-spread, two particular people come to mind, when I think of 1890s writers, who were rebellious teenagers: Edmund Gosse and Constance Wilde.

Obviously, Gosse comes to mind because of his memoir, Father and Son (1907), which bore the subtitle: "a study of two temperaments." His father, Philip Henry Gosse was a deeply religious scientist, who rejected the theories of his contemporary, Charles Darwin. In Father and Son, Gosse focuses on his father's rejection of the theory of evolution and his own coming of age through the rejection of his father's religion.


My own state, however, was, I should think, almost unique among the children of cultivated parents. In consequence of the stern ordinance which I have described, not a single fiction was read or told to me during my infancy. The rapture of the child who delays the process of going to bed by cajoling 'a story' out of his mother or his nurse, as he sits upon her knee, well tucked up, at the corner of the nursery fire—this was unknown to me. Never in all my early childhood did anyone address to me the affecting preamble, 'Once upon a time!' I was told about missionaries, but never about pirates; I was familiar with hummingbirds, but I had never heard of fairies—Jack the Giant- Killer, Rumpelstiltskin and Robin Hood were not of my acquaintance; and though I understood about wolves, Little Red Ridinghood was a stranger even by name. So far as my 'dedication' was concerned, I can but think that my parents were in error thus to exclude the imaginary from my outlook upon facts. They desired to make me truthful; the tendency was to make me positive and sceptical. Had they wrapped me in the soft folds of supernatural fancy, my mind might have been longer content to follow their traditions in an unquestioning spirit.

As Gosse grew up to be a poet, it's safe to say that his life was formed through his parents' teachings - though not in the ways that they intended.

Constance Wilde had a terrible relationship with her mother. Franny Moyle, Constance's biographer, called Constance's mother "a selfish and difficult woman." Her mother's conduct toward Constance may be characterized as abusive. It was a relationship that Constance survived through forming a rich internal life and getting away to school by taking classes at the University of London. The 1871 and 1881 censuses describe Constance as a scholar. As was the case with Gosse, Constance's rebellion was ideological, but also deeply personal.

The outfit that Constance is pictured in above was typical of young aesthetes in her day, which was viewed as both a fashion and an intellectual movement - almost the way that hippies, or people who only wear vegan clothing can be viewed as participating in both a fashion and intellectual (or moral) movement. Constance's brother mocked her dresses and the rest of her family, including an eventual step-sister, encouraged her to dress more like them. But Constance married the Prince of the Aesthetic Movement and realized her independence through marriage - a trope in young Victorian women's lives.

Gosse and Constance's stories critique the Victorian Era as a whole and represent examples of positive social changes (women's education and learning in general), but not all teenage rebellions go so well.

Teen pregnancies are often used as a symbol of teenagers gone wild, so it is worth noting here that during Queen Victoria's reign the rate of premarital pregnancies hovered around 20%, according to Eurostat. It's likely that number was much higher. Yet, there is something twisted about viewing sex as an act of rebellion.

The "fallen woman" was a blanket term that Victorians applied to any unmarried woman with sexual knowledge of any sort. This term covered rape victims, prostitutes, and unwed mothers alike; in some families, it might even be applied to a woman who read French novels.

The "new woman" represented another kind of rebellion, closer to what young Constance Wilde was up to.  This term was popularized by Henry James in the 1870s and referred to an emerging feminist ideal.


"In Victorian England, as men clung to the sanctity of the patriarchy, they were increasingly becoming more and more frightened of their own women. Bram Stoker capitalized on this fear in his iconic novel, Dracula. In 1897, a "New Woman" was emerging in Victorian society, coinciding with the women's suffrage movement throughout England. This New Woman, riddled with feminist awareness, would be the cause of fodder for Stoker's heroine, Mina Harker. Because this New Woman was aspiring to be independent of patriarchal male dominance, (or had already obtained said independence) to the old guard of Victorian society, she was viewed as perverse. The New Woman was a mutation of the woman the patriarchal society wanted her to be. The New Woman's strides towards economic and sexual changes in society as a whole should be viewed as terrifying. Stoker takes these beliefs, and applies them to his female characters in Dracula" - source.

Even Bram Stoker's wife might have been viewed in terms of the new woman for her interest in aesthetic, also called "hygienic," dress, she ran in the same circle of women as Constance and even once dated Oscar Wilde.

Oscar Wilde's youthful romance with the future Mrs Stoker was also a kind of young rebellion because she was penniless, while he came from an upper-class family, whose fortune was waning.

There were lots of ways for young men to rebel, especially in the 1890s. Any society that oppresses one group, the way that Victorians repressed women, also represses the dominant group by making the perceived characteristics of the oppressed group taboo. Oscar Wilde rebelled by incorporating long hair and feminine characteristics into his interpretation of aestheticism.