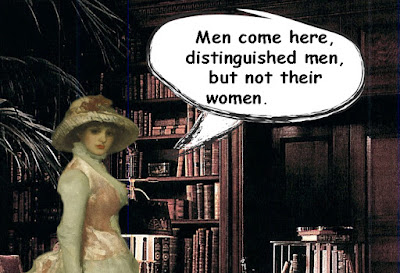 "Men come here, distinguished men, but not their women. I am outside ... It is only right to tell you, that it isn't a good thing for you to come here. You might not get another post." Source.

According to Devon Cox, these were the words of the socialite, Lady Meux, to the Christian Socialist, Margaret McMillan. In the end, it was Meux who lost her taste for McMillan.

A member of the Fabian Society, McMillan did volunteer work in the poorer neighbourhoods of London. We remember her for the work she did to improve the lives of children to which end she wrote books on early childhood education and pioneered the play-centred approach that we use to teach our children today.

When she went to Meux that day, McMillan was looking for a job; Meux needed to hire a companion. A well-born, or well-raised, woman in England during the 18th to the mid-20th century could find work as a governess or a lady's companion -- literally a companion to a woman who had more money. This position evolved from the position of a lady-in-waiting, which were traditionally high-born women, who took the position for status of associating with higher born women thereby improving their marriage prospects. In the 1890s, women, like McMillan, applied for the job because they needed the money.

As I've mentioned before, Meux came from humble origins, but she married well, even though her in-laws couldn't stand her. Rosaleen Joyce calls Meux "a rags-to-riches barmaid." Many people disliked Meux and spread rumours that she once worked as a prostitute. During McMillan's interview, Meux told her that she was "a woman not received," by which she meant that Society women shunned her. Working for Meux, McMillan's reputation would be tainted by Meux's -- at least that was the warning.


McMillan became her companion. Lady Meux saw in her the potential to become a great actress and paid for her training. She was most displeased, however, at McMillan's public display of socialist views. McMillan stood up for her principles and left Lady Meux's employment, despite her lack of financial means.

Both women went on to live amazing lives, which just goes to show that one thing not working out doesn't mean all things won't work out, even if everything turns out differently than you thought it would.