A Picture Worth a Million Pounds

Before and during the trials of Oscar Wilde, his friends, even the judge, hoped he would flee. One of these friends was the painter: Henri de Toulouse-Lautrec, whom Wilde met some time before in Paris, where Toulouse-Lautrec did a portrait of Wilde.

Toulouse-Lautrec was in London the night before Wilde's case would go to court against the Marquess of Queensberry, who accused him of homosexual practices. Toulouse-Lautrec wanted to paint another portrait. They met, but Wilde was too nervous about the trials to sit for a portrait.

Alone, Toulouse-Lautrec went back to his hotel room, disappointed, and painted this portrait: 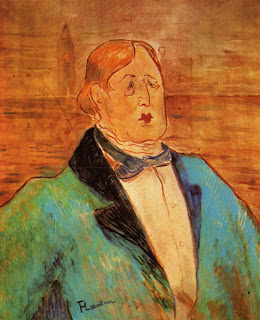 The portrait is now valued at over £1m. It's believed the Oscar and his friend met that night at a male brothel or, at least, that is what is inferred by the Guardian, who reports that:


Toulouse-Lautrec "added the background sketch of the houses of parliament to locate the portrait in London, but it was a prophetic touch: in the trial Wilde was asked about the location of a male brothel in Westminster. It was, he told the court, near the House of Commons."

Wilde wasn't the only one getting a portrait done. Check out what his first love was doing while he was in court.