There's no denying the men's club aspect to the culture of writers in London, during the 1890s. Even the Bohemian arts movement excluded women in London in ways that women were included in France. This, however, doesn't mean that women didn't participate! One example is Olivia Shakespear.

In the 1890s, Shakespear was a novelist and she didn't just sit at home writing novels under a pseudonym. Shakespear used her real name on all of her publications. She got out of the house, was active in London's writerly circles, most notably with William Butler Yeats. 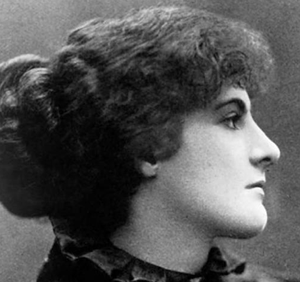 Shakespear and Yeats met on 16 April 1894, at the launch party for the Yellow Book. Shakespear captivated Yeats instantly. Of the occasion, he wrote in his memoirs:


At a literary dinner where there were fifty or sixty guests I noticed opposite me, between celebrated novelists, a woman of great beauty. Her face had a perfectly Greek regularity, though her skin was a little darker than a Greek's would have been and her hair was very dark. She was exquisitely dressed with what seemed to me very old lace over her breast, and had the same sensitive look of distinction I had admired in Eva Gore-Booth. She was, it seemed, about my own age, but suggested to me an incomparable distinction.

After that night, the two became great friends, who would share literary ideas and notions. Though they were both married, in time, they also became lovers. This romance, of course was always overshadowed by Yeats' obsession with Maud Gonne, who he met in 1889 and pursued for decades. Consequently, Shakespear's affair with Yeats was probably overwhelming intellectual. They made many friends through this affair as well. Shakespear introduced Yeats to Ezra Pound in May 1909. 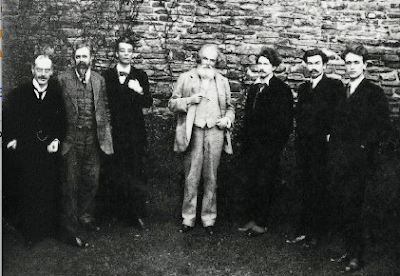 Shakespear shouldn't have been having an affair anyway. Shakespear was Olivia's married name. Her maiden name was Tucker. There doesn't appear to be any relation to the bard.

Email ThisBlogThis!Share to TwitterShare to FacebookShare to Pinterest
Labels: how they met, Olivia Shakespear, Shakespeare, The Yellow Book, W.B. Yeats